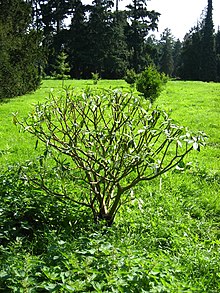 Habit with leaves in summer. 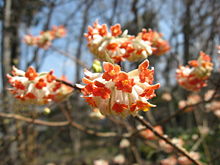 Inflorescences with a different color on branches without foliage.

Edgeworthia chrysantha grows as a deciduous shrub that usually reaches heights of 0.7 to 1.5, rarely up to 2 meters. The branching is mostly trichotomic , i.e. in three parts. The sturdy, squat twigs have a brown bark that is downy hairy while young .

The leaves fall off before flowering. The alternate arranged at the ends of the branches leaves are stalked short. The simple leaf blade is elongated, lanceolate or obscure lanceolate with a length of 8 to 20 cm and a width of 2.5 to 5.5 cm with a gradually narrowing blade base and a pointed upper end. Both leaf surfaces are whitish silky hairy, denser on the underside. The 10 to 13 pairs of lateral nerves are thin and curved and hairy with downy hair.

The flowering time at the natural sites in China extends from late winter to early spring. The 1 to 2 cm long inflorescence stem is grayish-white rough haired. The terminal and lateral, capid inflorescences contain 30 to 50 flowers. The approximately ten bracts are finely hairy.

The base of the fruit is enveloped in the durable cup. The ellipsoidal stone fruit with a length of about 8 mm and a diameter of about 3.5 mm has a downy hairy upper end. The fruits ripen between spring and summer.

Edgeworthia chrysantha is native to the Chinese provinces of Fujian, Guangdong, Guangxi, Guizhou, Henan, Hunan, Jiangxi, Yunnan, and Zhejiang. It thrives in forests and on shrubby slopes.

Edgeworthia chrysantha is a neophyte in Japan and the southeastern US state of Georgia .

Edgeworthia chrysantha is grown in temperate climates in China and Japan.

The species name Edgeworthia chrysantha was published on February 28, 1846 by John Lindley in Journal of the Horticultural Society of London , 1, pp. 148-149 a few weeks earlier than Edgeworthia papyrifera ( Philipp Franz von Siebold and Joseph Gerhard Zuccarini : Abhandlungen der Mathematisch- Physical class of the Royal Bavarian Academy of Sciences , 4 (3), 1846, pp. 199-200) and the previously published name has priority. The oldest name for this species, Magnolia tomentosa Thunb. ( Carl Peter Thunberg : Transactions of the Linnean Society of London , 2, 1794, p. 336) was never actually used and was formally rejected to use Edgeworthia papyrifera sieve. & Zucc. to protect; therefore the name Edgeworthia tomentosa published by Takenoshin Nakai ( Botanical Magazine 33, 1919, p. 206) was also rejected. The name Daphne papyrifera is not validly published: D. Don (Prodr. Fl. Nepal .: 68. 1825) quoted "Daphne papyrifera Buchanan-Hamilton" only as a synonym of Daphne odora . Later Siebold (Verh. Batav. Genootsch. Kunsten 12: 22. 1830) commented on the use of "D. papyrifera" to make paper, referring to Edgeworthia chrysantha as we understand it today, but this is not acceptable as a valid description or diagnosis ( see Art. 32.3 of the “Vienna Code” ICBN ).

In the type protologue the following type locality was given: “ A deciduous shrub, producing bunches of yellow sweet-scented flowers, from Chusan, & c .; from Mr. R. Fortune. Received April 9, 1845 "

Edgeworthia chrysantha is used as an ornamental plant.

The long bast fibers are used to produce high-quality paper, called Japanese paper . To do this, the branches are harvested in spring or early summer and the leaves are removed. The twigs are steamed until the fibers tear off and the outer bark is removed. The fibers are boiled with soda ash for two hours and then beaten with hammers or treated in a mixer. The color of the Japanese paper is off-white. The twigs are very flexible and can be tied into knots.

The drug from cut roots is used as a remedy for eye diseases.