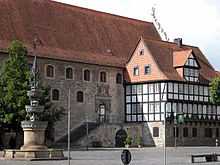 West side of the customs house

Detail of an etching by AA Beck from 1776 : On the left side you can see the Krambuden, which were on the north side of the Gewandhaus until October 14, 1944.

The former Rüninger customs house is a half-timbered house built in the Renaissance style from 1643, which has been located on the northwest side of the Gewandhaus in Braunschweig since 1950 .

The old customs house was built in 1643 in the northwest of the village of Rüningen , a few kilometers south of Braunschweig on Frankfurter Strasse , the medieval Reichsstrasse to Frankfurt am Main ( former location ; in the course of the territorial reform that took place in 1974, the part of Frankfurter Strasse running near Rüningen was turned into Thiedestrasse renamed). Together with the Rüninger Tower , first mentioned around 1400 , it formed part of the southern Braunschweiger Landwehr . The tower was demolished in 1724. The customs house was retained and was an important customs post. 52.224166666667 10.503333333333

Over time, however, the customs house lost its importance and deteriorated. In the first half of the 20th century, on the one hand, it had become more and more dilapidated, and on the other, it represented an obstacle to the developing modern road traffic.

Allied bombing raids during the Second World War destroyed a large area of the Braunschweig city center or at least, as in the case of the old town market and the buildings adjacent to it, was seriously damaged. Gewandhaus, Altstadtrathaus , Stechinelli House , the House of the Seven Towers and the Altstadtmarktbrunnen were very badly damaged. Other buildings such as B. the Krambuden, which had been on the north side of the Gewandhaus since 1470, as well as houses on the south-east side of the market square were completely destroyed and could no longer be reconstructed. In particular, the destruction of the Krambuden had a large gap in the structural design of the market square, v. a. following the Eiermarkt and the street “An der Martinikirche”, torn. Thus, at the end of the 1940s, the desire arose to revive the central square with the most important buildings, and it was also decided to close the gaping gap between the Gewandhaus and Martini Church, building on the design of the north side before the destruction by building a half-timbered building there again.

The former Rüningen customs house was chosen, which at that time was already in a desolate condition and was about to be demolished due to the traffic situation in Rüningen. The half-timbered house was then dismantled, and the most important and richly decorated structural elements such as cleats , sill beams, etc. Ä. were salvaged and restored for the reconstruction at the old town market . ( current location ) 52.262555555556 10.517277777778

The customs house originally only had two floors. At its new location, it was given a basement made of stone blocks so that the floors above and the roof can be attached to the Gewandhaus as flush as possible. The building entrance has since been on the west side. The former customs house was used by Peter Borel, the landlord of the more than 650 year old "Gewandhauskeller", an inn in the basement of the Gewandhaus, as a residence. There is a plaque on the west side of the house.

Architectural monuments on the old town market in Braunschweig