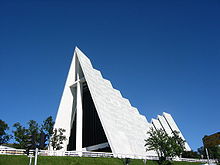 The Arctic Cathedral in Tromsø

The Arctic Cathedral ( Norw. Ishavskatedralen , actually Tromsdalen kirke ) is an Evangelical Lutheran parish and seaman's church and symbol of the city of Tromsø . A real cathedral , i. H. Episcopal Church, it is not. It was built in 1965 on the mainland side of the city on a small hill on the outskirts. The church is east .

For travelers on the Hurtigruten , midnight concerts are offered on the southbound trip.

The Alfred Hansen memorial is located southwest of the church .

The sloping ceilings reach down to the ground and thus form the outer wall in the north and south of the building at the same time. They were built from concrete clad with pearl gray, fire-coated aluminum and look like stacked, stylized sheets of ice. A new lightweight concrete that also has good insulating properties was used as the concrete . The individual elements are four meters wide and 30 centimeters thick. They are reinforced with steel and cast on site using specially made scaffolding. The concrete elements rest on steel frames that extend from the floor to the roof ridge. As a roof covering, instead of the corrugated aluminum sheet ultimately used, a plastic membrane with stone grains was also considered. Another roof variant that was not implemented provided for copper plates, which, however, would have led to significant additional costs.

The 35 meter high west front of the church is made of transparent, colorless glass. The windows are fitted with fluorescent tubes that illuminate both the exterior and the interior. The lighting concept was created by Gunnar Eigil Støltung . Støltung was awarded for this in 1966. The entrance doors are also located on the western front. In front of this glass facade, which appears dark from the outside, a monumental white cross dominates, which can be seen from afar.

Stained glass window in the choir

East wall of the Arctic Cathedral

The choir side of the church was originally closed off to the east by a 140 m² window made of simple glass. The 23-meter-high glass mosaic was subsequently over a period of three years from Victor Sparre in Dallglas created technique and inaugurated on June 25 1972nd It is entitled " The Return of Jesus ". It is one of the largest glass paintings in Europe and consists of 86 rectangular fields. A total of eleven tons of glass were processed. The pieces of glass are each two centimeters thick, monochrome and shiny. In contrast to the usual church windows, the parts could not be framed with lead , but were reinforced with iron and then connected with concrete. Such large, load-bearing surfaces were created. Sparre was of the opinion that the otherwise soulless building would only become a real place of worship with the window and the visible Christ Annunciation. In addition to the main motif, which thematizes the return of Christ, the glass mosaic contains further details. The hand of God can be seen in the upper tip, which symbolizes the intervention in history. God is about to complete his creation. Incoming light conquers darkness. The figure of Christ is depicted bright and powerful. He has overcome suffering and is received with jubilation by humanity, represented by Adam and Eve. Underneath, the way people deal with creation is symbolically shown. Skulls and barbed wire stand for self-created suffering and war. Hammer, nails and dice show in another place the treatment of God's Son by mankind when he first appeared. Another motif is a clock that shows the time five to twelve, the Bible and the path to the church. They are symbols that humanity is in the last phase of its history but that there is still time to strive for redemption and to take the path of love.

View of the interior

On the simple altar there is a 45 centimeter high altar cross created by the designer Bjørn Østern . The silver cross, which has already been shown at goldsmith exhibitions, consists of two pipes soldered together that are split open on the front and thus allow a glimpse of their gold-plated interior. In addition, there are two large and two small candlesticks on the altar , the large ones being decorated with crosses. Behind the altar there are large white wall panels to visually close the room.

The altar bench as well as the pulpit , baptism and church stalls were made of light oak by the companies AS Målselv-Møbler and Thorheim Snekkerverkstad . Church and knee benches were padded and covered with beige leather. The baptismal font and baptismal jug are made of silver and decorated with an ornament of a dove representing the Holy Spirit. The box for the hosts and the chalice are gold-plated inside. Both items and the wine jug have an engraved cross.

Both the bridal chairs and most of the paraments in the church were created by Den Norske Husflidsforening , who are considered specialists in home art. During the church year, paraments of different colors are used.

The altar was originally surrounded by a closed boundary called the altar ring. However, it was felt as an unnecessary obstacle between pastor and parish and therefore opened in the middle.

The church had its first organ since 1965. However, in the course of time, significant defects became apparent. Several pipes broke under their own weight. Another problem was that the acoustic contact between the organist and the instrument was hindered by a concrete slab. On the occasion of the 40th anniversary of the Arctic Cathedral, a new organ was inaugurated on December 17, 2005. It was built by the Swedish organ builder Grönland Orgelbyggeri and has 42 voices distributed over three manuals and pedal .

The church bells, which ring automatically, are on the west side of the nave, above the main entrance behind the large cross. The bells were cast in the summer of 1965 in the bell foundry O. Olsen & Søns klokkestøperi in Nauen near Tønsberg . The largest bell has a diameter of 1.18 meters and weighs 1,050 kilograms. It bears the inscription Hør meg alle (German: Listen to me all ) and is decorated with an ornament in the form of a Bible . The smallest bell weighs 570 kilograms with a diameter of 0.99 meters. The inscription is Hør, mitt folk (German: Hear my people. ) The decorative ornament here is a dove.