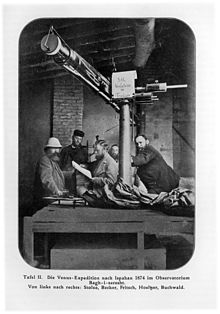 Research trip to Isfahan to observe the passage of Venus in 1874. From left to right: Franz Stolze , Ernst Becker, Gustav Fritsch , Ernst Hoeltzer and Hugo Buchwald

Becker worked as an observator at the Berlin observatory , from 1870 he was involved in the zone observations of the Berlin Academy. On February 17, 1883, he was appointed to the Gotha observatory , appointed professor by the Gotha State Ministry and from May 16, 1883 employed as director of the observatory. In 1883 he was also elected a member of the Leopoldina .

He found the found instruments and the electrical system defective and took care of their overhaul. With this he continued the observations that Adalbert Krüger had started. He reduced his Berlin observations and fitted them into the existing results.

Since the Äquatoreal of Repsold had not proven in its measurement function, he did it from this Hamburg-based company to a telescope with equatorial mount rebuild. It got a new lens from Reinfelder and Hertel and a new position micrometer .

By rearranging the library and creating a catalog at the same time, Becker brought the Gotha observatory to a modernized and operational state.

In August 1887 he informed the State Ministry that he had received a call to the mathematical and physical faculty of the University of Strasbourg and left Gotha on November 30, 1887.

Becker then headed the Imperial University Observatory in Strasbourg for 22 years . Three volumes of the annals of the university observatory were published under his direction . One of his students was the well-known astronomer Karl Schwarzschild . On April 1, 1909, he resigned the management of the observatory; his successor was Julius Bauschinger .