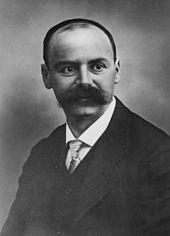 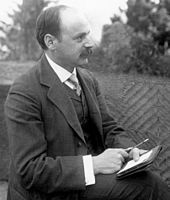 Karl Schwarzschild (born October 9, 1873 in Frankfurt am Main ; † May 11, 1916 in Potsdam ) was a German astronomer and physicist and is considered one of the pioneers of modern astrophysics .

Karl Schwarzschild was born in Frankfurt as the eldest of six children to a wealthy Jewish family (but was later baptized). The Schwarzschild-Ochs family was a long-established trading dynasty in the textile industry, a branch of an old Jewish family from the Lower Rhine who immigrated to Frankfurt in 1499 with a shop in an outstanding location at Roßmarkt 13 (formerly Roßmarkt 7) and on Leipziger Strasse . His parents were Henrietta Sabel and Moses Martin Schwarzschild. His four younger brothers were named Alfred, Otto, Hermann and Robert, his only sister Clara. Alfred (1874–1948) became a painter. Karl grew up in a cultivated upper class environment in which diverse interests (including music and art) were cultivated. In Frankfurt he attended the Jewish elementary school and then the municipal high school , where his interest in astronomy was aroused at an early stage . As a 16-year-old student he published two papers on the orbit of planets and binary stars in the Astronomische Nachrichten .

After graduating from high school , which he passed as the best of his class, he studied astronomy at the University of Strasbourg from 1890 . In 1892 he moved to the Ludwig Maximilian University of Munich , where he 1896 of Seeliger Hugo about the emergence of equilibrium figures in rotating fluids doctorate .

Activity in Vienna and Munich

From 1897 he worked for two years as an assistant at the Kuffner observatory in Vienna . There he dealt with the photometry of star clusters and laid the foundations for a formula that describes the relationship between the intensity of starlight, exposure time and blackening of the photo plate in astrophotography . An important part of this formula is the Schwarzschild exponent . In 1899 he returned to Munich and completed his habilitation there.

Activity in Göttingen and Potsdam

From 1901 to 1909 Schwarzschild was professor and director of the Göttingen observatory . There he was able to work with personalities such as David Hilbert and Hermann Minkowski .

In 1905 he was elected a full member of the Göttingen Academy of Sciences . In 1909 he became director of the Astrophysical Observatory in Potsdam .

Stadtfriedhof Göttingen : grave of Karl Schwarzschild and his family

When the First World War broke out in 1914, he volunteered for the army. He served in the artillery troops on the Eastern and Western Fronts and had to perform ballistic calculations there, among other things . During the war, however, he became seriously ill with an autoimmune skin disease ( pemphigus vulgaris ) and returned from the front as an invalid in March 1916 . He died two months later at the age of only 42.

His grave and that of his family are in the Göttingen city cemetery (section 35).

Karl Schwarzschild married Elisabeth Rosenbach, a great-granddaughter of Friedrich Wöhler , in 1909 . The marriage had three children: Agathe Thornton b. Schwarzschild (1910-2006), who emigrated to Great Britain in 1933 and went to New Zealand in 1948, where she became professor of ancient philology at the Otago University of Dunedin, the astrophysicist Martin Schwarzschild and Alfred Schwarzschild (1914-1944), who stood up because of the persecution of the Jews took his life by the National Socialists.

While serving in the war , Schwarzschild wrote a treatise on relativity and one on quantum physics in Russia in 1915 .

His work on relativity yielded the first exact solutions to the field equations of general relativity - one for uncharged, non-rotating spherical symmetrical bodies and one for static isotropic empty spaces around solid bodies.

In astronomy he worked, among other things, on the photographic measurement of the brightness of stars . In the course of studies on radiation transport in the solar atmosphere , Schwarzschild coined the term radiation equilibrium . Using stellar statistics methods , he examined the distribution of stars in the Milky Way .

During his time at the astrophysical observatory in Potsdam he also dealt with the explanation of the emission spectra of atoms . He introduced methods of celestial mechanics for the calculation of emission spectra in the Bohr-Sommerfeld atomic model . His last publication is a contribution to early quantum mechanics about the Stark effect .

The scholarly estate of Schwarzschild is kept in the special collections of the Lower Saxony State and University Library in Göttingen .

to the solar atmosphere:

The Karl Schwarzschild Medal is awarded every year by the Astronomical Society to astronomers of high scientific rank.

The street at the European Organization for Astronomical Research in the Southern Hemisphere (ESO) in 85748 Garching near Munich bears his name, as do streets in Berlin and Göttingen . Since it opened on October 19, 1960, today's Thuringian State Observatory Tautenburg has been called the Karl Schwarzschild Observatory .

"It's always nice to have strict, simple-form solutions."