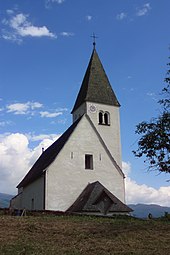 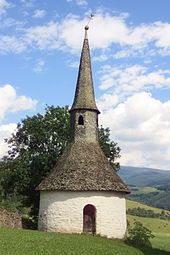 The originally Romanesque church consists of a nave from the 13th century and a choir from the 14th century supported by three-tiered buttresses . The tracery windows were partially walled up. During the restoration of the church in 1993, a late Gothic frieze was exposed. The tower on the south side of the nave has coupled, Gothic sound windows, some of which have tracery. It is crowned by a pyramid helmet. The oldest bell dates from the 13th century, further bells were cast around 1350 or 1450. In the masonry vestibule there are four Roman times, partly fragmentary grave inscriptions, which, through their written form as well as linguistic inaccuracies, indicate the very superficial Romanisation of the population of remote areas. The name of the Celtic horse goddess Epona appears in a grave inscription . The ogival west portal has a door with Gothic fittings.

Inside the nave was vaulted with a baroque needle cap barrel, the western gallery has a double-headed eagle and a chronogram 1787 on its classicist wooden parapet . A pointed arched triumphal arch connects the nave with the choir. The choir consists of a square yoke with cross-ribbed vaults and a five-eighth closure . In the choir there is a Gothic sacrament niche with a wrought iron rosette grille and a Gothic baptismal font .

On the north wall of the nave, a fresco with the Adoration of the Three Magi and the half-length figures of two saints from the second half of the 14th century has been preserved. The paintings of two saints on the triumphal arch wall date from the same period. The Annunciation to Mary above was made at the beginning of the 15th century. The rural paintings on the right on the triumphal arch wall and on the south wall of the choir with the depictions of Christ on the Mount of Olives as well as poor Lazarus and the rich Prasser are dated around 1600. In the east window of the choir, stained glass with ten apostle figures from the second quarter of the 15th century can be seen.

View inside the church

The high altar from 1699 consists of a simple aedicule with a small attachment between volutes and acanthus tendrils on the side ears. The main picture shows Saints James and Christophorus , the top picture shows Mary's teaching. The side figures of the altar represent John the Evangelist and Saint Leonhard .

The left side altar, made around 1660, consists of an aedicule with volutes over a small base and a cartilage cartridge between the volutes as an attachment. The side ears and the base are decorated with cartilage . The center of the altar is a painting with the apparition of Mary from the good advice to Genazzano , the top picture probably represents Peter . The right side altar from the end of the 17th century shows the baptism of Christ on the altar panel and St. Francis on the top .

The figures on the pulpit from the second half of the 18th century represent the personifications of Christian virtues .

The church also features a console figure of St. Catherine from the second quarter of the 18th century and a lecture cross made around 1600 .

The Karner northeast of the church is a late Romanesque round building with a stepped console apse . A high, pointed roof turret was added to the conical roof at a later date . Inside, the flat ceiling was painted in the early Baroque period. A heavily faded fresco of the Passion of Christ has survived fragmentarily from the end of the 13th century.

The crucifix at the cemetery was made around 1600.