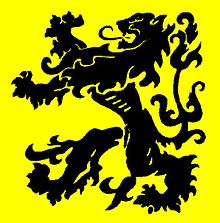 The Flemish Movement ( Dutch Vlaamse Bewegungsing ) is a collective name for associations and people who have been claiming in the broadest sense since the middle of the 19th century to represent the Dutch- speaking Flemish population of Belgium as a separate "ethnic group" within Belgium. Historically, the range of positions extends beyond state independence to affiliation with the Netherlands (“Greater Netherlands”) or the German Empire. Flemish nationalists and some of their alliances collaborated with the German occupation forces during World War I and World War II.

People who belong to the Flemish Movement are often referred to as flamingants .

The Flemish Movement emerged after 1830 in response to the dominance of French in the state that emerged after the Belgian Revolution . The Flemish Movement was initially a linguistic and cultural movement that primarily demanded the equal use of Dutch in the Flemish parts of the country. In the middle of the 19th century the movement gained increasing influence in the Belgian parliament through the reform of the electoral law . The parliamentary work led in 1898 to the official recognition of Dutch as the national language in the so-called Equality Act ( Dutch Gelijkheidswet ).

However, official equality in no way led to pacification. Belgium was now officially a bilingual country, but in fact only Flanders became bilingual, while Brussels and Wallonia remained monolingual in French. Many Francophones feared for their privileges in a bilingual state. The Dutchization of administration and education was slow in the Flemish parts of the country. In secondary schools in particular, teaching was almost exclusively in French. One of the central demands of the Flemish Movement was therefore the Dutchization of Ghent University . Demands for an independent Flemish state, however, were limited to radical groups.

The First World War and the German occupation of Belgium led to a radicalization of parts of the movement. While most of the flamingants, the so-called passivists , refused to collaborate with the Germans , the activists saw in the occupation the chance to achieve essential goals of the movement with German help. The German occupation administration consciously tried to win the Flemish movement over with the Flemish policy . Flemish soldiers also organized themselves behind the front in the front movement . The occasion was u. a. Conflicts between the mostly Flemish teams and mostly Francophone officers.

The collaboration of the "activists" served some francophone politicians to bring the Flemish movement in its entirety into connection with the German occupation. On the other hand, anti-Belgian voices became increasingly audible in the Flemish Movement itself. Founded by former soldiers and members of the front movement Front Party demanded an autonomous Flanders within the Belgian Federal State . The more moderate forces in the movement also made further demands on the Belgian state. The minimal program no longer advocated the implementation of bilingualism in Belgium, but a monolingual Dutch Flanders. The Ijzerbedevaart , a pilgrimage to the graves of Flemish soldiers on the Yser under the mottos "Never again war" and "Here our blood, when our rights?", Developed into the central event of the Flemish Movement .

At the end of the twenties, groups with clearly fascist traits emerged within the Flemish Movement . The most influential was the Vlaams Nationaal Verbond (VNV), founded in 1933 .

"The majority of the Flemish nationalist groups also collaborated with the German occupiers during the Second World War . The German National Socialists, for their part, tied in with the occupation policy in the First World War and did their best to strengthen the“ Flemish Movement ”, which was Dutch-speaking, anti-French and pro-German and was full of hatred for the Belgian state founded in 1830. Since the end of the 19th century it had formulated the goal of making Ghent a Dutch-speaking “Rijksuniversiteit”, and this was exactly what the German occupiers had achieved in 1916. Because of their anti-Belgianism, who culminated in the slogan “Belgica delenda” in the 1920s, their fondness for German romanticism and the appreciation of Hoffmann von Fallersleben , who with his “Horae Belgicae” was considered the herald of the Flemish movement, many Flemish activists welcomed the fact that the Germans in both world wars their independence encouraged efforts. One of the architects of this policy in Belgium and the Netherlands , Joseph Otto Plassmann vom Ahnenerbe der SS , a Nordic philologist and folklorist, professor at the University of Bonn after the Second World War until his retirement in 1958 , saw the activity of the "Ahnenerbes" in 1940 in Belgium very much in line with the First World War. He claimed that he had established the Flemish-Walloon language border together with the Flemish linguist René Van Sint-Jan as early as 1917. "

According to contemporary historian Bernd-A. Rusinek was "the Flemish-Reich-German complex, including the involvement of the University of Ghent ... in a close connection with the history of the 'SS-Ahnenerbes'" as well as generally in connection with the SS, which was interested in it, as part of the "Germanic scientific mission ", Which was headed by SS-Hauptsturmführer Hans Ernst Schneider (later Rector of RWTH Aachen University as" Hans Schwerte ") to determine the course of cultural policy in Flanders. The 1940-1945 collaboration discredited the Flemish nationalists among the Belgian population. In 1954, however, a corresponding party could be founded again, which was able to win over parts of the electorate, the Volksunie .

The Flemish Movement today has representatives in almost all Belgian parties that have advocated defining the language border . This goal was achieved with the Gilson Act in 1962 . As part of the Flemish-Walloon conflict , the division of the Catholic University of Leuven began in 1968 : The French-speaking department of the University of Leuven ( Université catholique de Louvain  (UCL)) was relocated to Wallonia in 1971 - to a newly founded test- tube town : Louvain-la-Neuve . With the formation of the three communities ( Flemish Community , French Community and German-speaking Community ), Belgium became a federal state from 1970.