The flag of El Salvador consists of three horizontal stripes in blue-white-blue from top to bottom. The colors stand for sky, peace and ocean.

There are three different versions of the national flag . The three-stripe flag without an additional symbol serves as a civil flag and a service flag for the country.

The flag with the coat of arms of El Salvador in the center is used as a service flag on the country and as a war flag .

In another alternative service flag, which is also used at sea and as a trade flag and war flag on land, the words DIOS UNION LIBERTAD ( God, Unity, Freedom ) are used instead of the coat of arms . 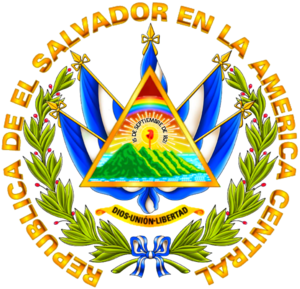 After El Salvador's declaration of independence on March 5, 1824, the state immediately joined the Central American Confederation founded in 1823 and accordingly used the flag of this confederation. Even after it collapsed in February 1839, El Salvador stuck to the idea of ​​unity for a long time. This was also evident in the continuation of the blue-white-blue flag until 1865, when only the coat of arms was slightly modified in 1841.

The final rejection of the union idea in 1859 manifested itself on April 28, 1865 with a radical change in the flag design. They orientated themselves strongly on the flag of the USA and chose a star-and-stripes pattern with 5 blue or 4 white stripes and a red, square field containing 9 white, 5-pointed stars. The number nine indicates the nine provinces of El Salvador. As the number of provinces increased, so did the number of stars - as is common in the USA. A flag with 11 stars was hoisted as early as June 1865, one with 12 stars in 1869 and one with 13 stars in 1873. Although the 14th province was added in 1877, flags with 14 stars were shown as early as 1875, as documented by contemporary images.

When El Salvador became a member of the Greater Central American Republic ( República Mayor de Centroamérica ) founded in 1895, a new flag was hoisted on November 2, 1898, again with the traditional colors of blue, white and blue. In the center was the coat of arms of the "Great Republic", which also included the states of Nicaragua and Honduras . On November 30, 1898, the confederation disintegrated and El Salvador returned to the flag of 1875. This was finally abolished on September 15, 1912 under the presidency of Manuel Enrique Araujo, by returning to the old Union flag blue-white-blue. Apart from a few minor changes that affected the coat of arms in 1916 and 1972, this has remained the national flag of El Salvador to this day.

Flags of the states of North America

Overview of all national flags