Flora was a municipality in the Norwegian province of Sogn og Fjordane (became part of Vestland in 2020 ). It was west of the province's coast. Its administrative seat was Florø . As part of the local government reform in Norway , Flora and the western part of Vågsøy were merged to form the new municipality of Kinn on January 1, 2020 .

In the north, the municipality bordered on Bremanger and in the east on Gloppen and Naustdal . South of the Førdefjords was Askvoll . The center of the municipality was the westernmost village in Norway, Florø , which was founded in 1860. It was also the largest town in the municipality. The inhabitants of Flora were called Floraværing .

In the north of Florø there are several mountains with a height of over 1000  moh. The highest point of the municipality was the Ålfotbreen glacier with 1385  moh. There are large areas of forest around the village of Eikefjord . The climate of Florø was shaped by its location on the coast, so it is often windy and rainy in the area. In Grøndalen in 1989 with 1190 millimeters of precipitation in one month, the highest precipitation value in the history of Norwegian weather records at that time.

Riksvei 5 , which connects Flora with Førde , runs through the area of ​​the former municipality . There are also connections via Riksvei 615 and Riksvei 614 . Ships of the Hurtigruten dock in Floro and there was an express boat connection between the local authority and the locations Måløy and Bergen . There was also an airfield and a helicopter base in the municipality.

When the municipality was dissolved, there were six hydropower plants in Flora. In 2016, the average electricity production was 26 gigawatt hours. The industry was mainly concentrated in the administrative center Florø. Industrial production was mainly characterized by shipbuilding, the fishing industry and the industry connected with oil production. In the field of fishing, salmon , herring and mackerel were exported and fish feed was produced. In terms of the amount of fish caught, Flora was the second most important fishing municipality in the former province of Sogn og Fjordane after Vågsøy . 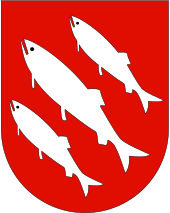 The commune's official coat of arms from 1967 showed three silver pegs on a red background. It was meant to indicate the herring stocks that used to be large.