His father Michel Le Tellier , Secretary of State for War under Jules Mazarin , married him to a wealthy heiress, the Marquise de Courtenvaux, and taught him the management of state affairs. The young man won the king's confidence and in 1666 succeeded his father as Minister of War. Turenne recognized his talent in the War of Devolution (1667/68). After the Peace of Aachen , Louvois devoted himself to organizing the French army. The years 1668 to 1672 were, as his biographer Camille Rousset wrote, "years of preparation in which Lionne worked with all his might to find allies, Colbert to find money, and Louvois to find soldiers for Ludwig". Louvois died suddenly after leaving the cabinet on July 16, 1691 - probably of a stroke. His sudden death aroused the suspicion that he had been poisoned, which Saint-Simon in particular wanted to substantiate in his memoirs through detailed witness reports. Louvois had especially drawn the hatred of Madame de Maintenon because he prevented the public announcement of her left-hand marriage to Louis XIV. His arrest was already decided. His successor was his only 22-year-old son Louis François Le Tellier, marquis de Barbezieux, who was trained by him . Louvois was Grand Master of the Order of Lazarus from 1673 to 1691 under the protectorate of the French crown.

Activity as Minister of War

Louvois' work during these years is linked to the historical development of the French army and armies in general. The progressive military system of the Netherlands served as a model . Above all, he reorganized the recruiting system, introduced violent recruitment, created a uniform pay system, and had a network of warehouses, barracks and hospitals (including the Hôtel des Invalides ) set up. The military orders of merit also got a new system. The almost forcible registration of the French nobility was primarily intended to record the next generation of officers. But this registration also complied with Ludwig's measures with which he kept the nobility under control by serving in the army or at court. Le Tellier also installed a system of inspectors who monitored the officers' military skills. Parallel to the chain of military command, a system of administrative authorities was set up and a stricter disciplinary system was introduced, which in the sense of absolutism enabled the state power and with it the king to have a stronger influence on the military. Newly established military schools improved education. The lieutenant colonel was introduced as a new rank. In addition to the colonels, who usually bought their rank, the lieutenant colonels represented militarily qualified personnel who quickly replaced the colonels de facto as operational commanders. Overall, the previously existing great sovereignty of the officers within the units they command was severely restricted. The promotion of officers was uniformly regulated according to seniority. Under Le Tellier, the previously very heterogeneous army emerged with clearly defined military branches, each with a specific task, training and equipment. 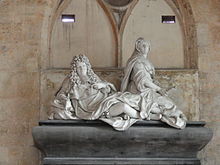 The success of his measures was shown in the victories in the Dutch War 1672–1678. After the Peace of Nijmegen , Louvois was popular, his father had been made chancellor, and Colbert's influence was fading. The ten years of peace between 1678 and 1688 in French history are marked by the rise of Madame de Maintenon , the conquest of Strasbourg and the repeal of the Edict of Nantes ; Louvois played an important role in all of this. The peacetime surprise attack on the eastern parts of the Spanish Netherlands in 1683 was not only planned but also carried out by Louvois and Joseph de Montclar .

In Louvois time also were Dragonnades invented. Total submission to royal authority was his political creed. Colbert died in 1683 and was replaced as controller general of finance by Claude Le Peletier de Morfontaine , a supporter of Louvois, and as minister for public buildings by Louvois himself. Louvois was still able to maintain the successes of the first years of the war against the Vienna Great Alliance (1689–1697), but died suddenly in July 1691.