The title of this article is ambiguous. For the wife of the Prussian Minister Friedrich Wilhelm von Reden with the same maiden name, see Friederike von Reden (1774–1854). 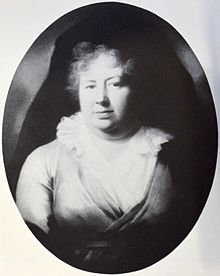 Only 16 years old, she married in 1762 during the campaign in Paderborn the officer in brunswick-wolfenbüttel rule services Friedrich Adolf Riedesel Freiherr zu Eisenbach and lived with him the next thirteen years Wolfenbüttel .

When her husband as General of brunswick-wolfenbüttel rule Subsidientruppen 1776 on the part of the British on the American Revolutionary War took part, she went to him in 1777 after their children. She witnessed the campaign until the surrender of the German-English troops in 1777 near Saratoga , cared for the wounded and cared for the sick. After being released from captivity, the couple went with their children to Canada , where the general continued to command the troops from Braunschweig until the end of the war in 1783, before the family then returned to Germany.

A Canadian source believes that Riedesel was the first in North America to set up a Christmas tree on Christmas Eve and decorated it with candles in accordance with German custom , in 1781 in Sorel .

In 1799 Heinrich published XLIV. Count Reuss , her son-in-law, as a private print “ Excerpts from the letters and papers of General Freyherr von Riedesel and his wife, née. v. Massow ". A year later, when General Riedesel had already died, the Berlin publisher Haude und Spener published the diary entries from the time in Canada and the former British colonies in North America under the title “ The professional trip to America. Letters from General Riedesel written to Germany on this trip and during her seven-year stay in America at the time of the war there from 1777 to 1783 ”. The book was translated into several languages ​​soon after its publication and is now considered an important source for the early history of Canada and the nascent United States of America.

After her husband died, Friederike Charlotte Louise Riedesel moved to Berlin in 1801, where she also died. She was buried in the crypt of her husband's family in Lauterbach .