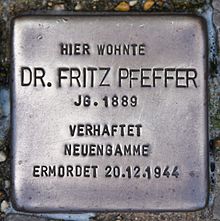 Stumbling block in front of the house, Lietzenburger Strasse 20b, in Berlin-Schöneberg

Prinsengracht 263, in the back of which Fritz Pfeffer was hiding

Fritz Pfeffer (born April 30, 1889 in Gießen ; † December 20, 1944 in Neuengamme concentration camp ) was a German dentist and a victim of National Socialism .

Fritz Pfeffer was born in Giessen as one of six children to Jewish parents. He studied dentistry in Berlin and ran his own dental practice there from 1922. His son Werner (1927–1995) came from his marriage to Vera Bythiner, whom he married in 1921. The marriage was divorced in 1933, and Pfeffer was then a single father. A short time later he met the Catholic Charlotte Kaletta (1910–1985, born in Ilmenau ), who shared his experience of a broken marriage. She was divorced from her first husband, Ludwig Löwenstein (born on May 31, 1892 in Wiesbaden) and with him they had their son Gustav (born on August 3, 1928 in Berlin-Tempelhof ). These two were deported together on September 26, 1942 from Berlin-Charlottenburg to Raasiku (Estonia) and then murdered in the Holocaust at an unknown date.

Both made numerous trips together. Due to the Nuremberg Race Laws in 1935, Pfeffer and Kaletta were not allowed to marry. After the November pogroms in 1938, they left Germany and went to the Netherlands . At the time, his son Werner was one of the few refugees who were taken in from Great Britain on a Kindertransport . Here he lived with Pfeffer's brother Ernst, who also worked as a dentist and died in 1944.

In the Netherlands, Fritz Pfeffer again worked as a dentist in a practice on the Amstellaan, today Vrijheidslaan, in Amsterdam-Zuid . Together with Kaletta, he was a regular guest at the Saturday afternoon teas of Otto Frank's family , where he also met Miep Gies in 1939 , who was soon one of his patients. She later allowed him to treat her despite the prohibition: “Christians had been forbidden for some time [1942] to be treated by Jewish doctors or dentists, but I refused to leave my excellent dentist. [Fritz Pfeffer] was even a jaw specialist, and besides, I really liked him. "

When Pfeffer asked his patient Gies in the autumn of 1942 if she knew where he could be hiding, she consulted with the Frank and van Pels families, who had already gone into hiding on July 6, 1942, and who consented to Pfeffer as the eighth person in their hiding place in the rear building on Prinsengracht 263 . Pfeffer lived in the Secret Annex from November 16, 1942. He shared a room with Anne Frank . He was in correspondence with Kaletta through Gies and was the only one of those in hiding who had correspondence with the outside world while in hiding. He planned to emigrate to South America with Kaletta after the end of World War II , so he learned Spanish in hiding. Pfeffer also worked as a dentist in the Secret Annex; this is how Anne Frank describes in her diary on December 8, 1942, how Pfeffer wants to pull a tooth from Mrs. van Pels. The description of the scene was published in a volume of Short Stories by Anne Frank in 1949; in Germany the episode is titled The Dentist .

On August 4, 1944, the eight people in hiding were betrayed and arrested by Karl Josef Silberbauer . Like the others, Pfeffer was first sent to the prison in the Weteringschans in Amsterdam for four days and then to the Westerbork concentration camp . On September 3, 1944, all eight were deported to Auschwitz , where they arrived on September 6, 1944. Pfeffer was deported to the Neuengamme concentration camp near Hamburg either via the Buchenwald concentration camp or via the Sachsenhausen concentration camp , where he died of the Ruhr on December 20, 1944 . Pfeffers first wife Vera Bythiner was murdered in Auschwitz, son Werner and Charlotte Kaletta survived the war. On April 9, 1953, the marriage between Charlotte and Fritz was recognized retrospectively to May 31, 1937.

Pfeffers wife Kaletta died on June 13, 1985 in Amsterdam. In autumn 1987, the then senior employee of the Anne Frank Foundation, Joke Kniesmeijer, came across letters, books and photos from Kaletta's estate at the flea market on Waterlooplein (Amsterdam), but none of them from the time in the Secret Annex. The collection was published together with a fictional interview with Kaletta and photos from the possession of Werner Pfeffers in 1990 under the title De kamergenoot van Anne Frank . The publication helped to correct the public image of Pfeffers, which had been negatively influenced by Anne Frank.

In Berlin , a stumbling stone in front of the house at Lietzenburger Strasse 20b, then Passauer Strasse 33, has been remembering Fritz Pfeffer since September 12, 2007 .

Fritz Pfeffer in the "Diary of Anne Frank"

The Diary of Anne Frank , which Frank had written especially during the time of immersion, was published in 1947 by her father Otto Frank for the first time. Anne Frank initially describes Pfeffer positively:

“As we all assumed, Pepper is a very nice man. Of course, he agreed to share the room with me. To be honest, I'm not that happy about a stranger using my things, but you have to have something for a good cause. "

A short time later, the relationship between the two had deteriorated. For Frank Pfeffer was now “the most old-fashioned educator and preacher of a long line of manners. […] Since I am generally considered to be the worst educated of the three young people, I have quite a lot to do to avoid the all too frequently repeated lecture and admonitions and to make myself deaf. ”Frank noted down in an overview of the interests of the residents Pfeffer: “Learns English, Spanish and Dutch with no significant result; reads everything, judges with the majority. "

“Would he please agree (really very polite) that I can use our table twice a week in the afternoon from four to five-thirty. Every day from half past two to four I sit there while Pfeffer sleeps, otherwise the room and the table are restricted area "(July 13, 1943)"

The negative picture of Pfeffers drawn by Frank, which she called "Albert Dussel" (= Albert Dummkopf) after revising her diary in March 1944, determined his public assessment for a long time. Shortly after the diary was published, Kaletta broke off contact with Otto Frank, presumably because of Pfeffer's negative portrayal in the diary. Even the housekeeper Pfeffers, who had worked for him for over a year, protested in a letter to Otto Frank in 1957 against the picture Pfeffers presented to the public in the diary: “Do you think a real idiot would have ever done it , his Dr. med. and his Dr. dent. close? Not me. By the way, have you ever thought about why Fritz became a nag during his time in hiding? You and the Van Pels family were together with the family until they were betrayed and were able to bear their bitter fate together, Fritz sat in between as a stranger, you know what worries Fritz had about his wife, he had to deal with himself alone. "

Fritz Pfeffer in the film

The Diary of Anne Frank has been filmed several times. The presentation of Pfeffers mostly follows Frank's assessment in the diary. The following actors took on the role of Fritz Pfeffer or "Albert Dussel" in the films: