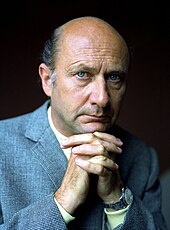 Pleasence was born the younger of two sons of a station master. A year before graduation, he left school and received a place at the Royal Academy of Dramatic Art for training as an actor, but could not take it because he did not receive the necessary scholarship to finance a living. After working for the British Railways, he was employed a year and a half later as Assistant Stage Manager at the theater on the island of Jersey . It was there that his acting career began in 1939 by participating in a theatrical version of Emily Brontë's novella Wuthering Heights . He was quickly successful and in 1942, during his first engagement in London, he played the curio in Shakespeare's What You Want .

His acting career was interrupted by World War II. As a pacifist, he initially refused military service and worked as a lumberjack for six months, but then changed his mind and went to the Royal Air Force , where he participated in almost 60 missions as a radio operator and gunner of the 166th Squadron of the RAF Bomber Command . On August 31, 1944, the Lancaster NE112, of which he was a crew member, was shot down in an attack on Agenville . Pleasance was captured and was interned in the Air Force Stalag Luft I POW camp in Barth until the end of the war .

He resumed acting a year after the end of the war. After working in Birmingham , he was hired by the prestigious Bristol Old Vic Company. There Laurence Olivier noticed him. In 1951, Pleasence went on a tour to New York with Olivier and Vivien Leigh , where they appeared in Shakespeare's Julius Caesar and Antonius and Cleopatra . After further theatrical successes, he began working for film and television in the first half of the 1950s. He celebrated a great theatrical success in 1960 in London and then on Broadway in New York in the role of Davies in the drama The Caretaker by Harold Pinter , which was later also made into a film.

Pleasence had its breakthrough in Hollywood in 1963 with the film Broken Chains , which was followed by other roles in major Hollywood productions. He also played the arch-villain Ernst Stavro Blofeld in the James Bond film You Only Live Twice . From the 1970s he also appeared frequently in B movies ( horror , mystery films ). With the role of the psychiatrist Dr. Sam Loomis in the movie Halloween by director John Carpenter , which became a huge hit with audiences and followed by five sequels, Pleasence became a cult figure in the horror film genre . His penultimate appearance was in the Italian slasher film Fatal Frames . Within a year, he starred in both 1976 and 1977 productions entitled Jesus of Nazareth ; In 1976 he was still seen as Pontius Pilatus, the following year he played the role of Melchior.

Pleasence was considered to be work-mad, which prompted him to appear in mediocre films that were below his level in terms of performance. He also emerged as an author of children's books.

Pleasence had daughters Angela and Jean with his first wife, Miriam Raymond, with whom he was married from 1941 to 1958. From his marriage to the actress and singer Josephine Martin Crombie from 1959 to 1970, the daughters Lucy and Polly Jo emerged. During her marriage to Meira Shore from 1970 to 1988, his daughter Miranda was born. He was married to his fourth wife, Linda, until his death.

While filming Halloween VI - The Curse of Michael Myers , Pleasence died in his adopted home of Saint-Paul-de-Vence in southern France of complications after a heart valve operation .

In its long acting career, Pleasence did not have a permanent German speaker, but since the early 1960s it has been spoken most frequently by Wolfgang Spier (14 times), Friedrich W. Bauschulte (10 times) and Horst Sachtleben (seven times), and on a temporary basis by Friedrich G Beckhaus (5 times, including in The Princes of Darkness ); in the first two parts of the Halloween series it was spoken by Holger Hagen .