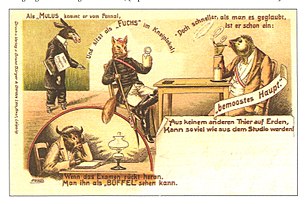 Photograph of foxes of Leonensia (1883)

A fox is a new member of a fraternity that for one or more semesters a trial period completed before the boy is a full member of the connection.

In the second half of the 19th century, the spelling " Fux " became common for some connections that were founded late . In some corps at certain university locations, the new members were or are called Renoncen .

Foxes arrived in Jena around 1770 amid the mockery of the students who were already waiting: “They are a lot of foxes”, “You have been smelled from far away”, “I think the guys are full of fear”, “It also smells like a lot of fox filth "

As part of since the Middle Ages occupied university initiation ritual of deposition there have been concepts that the newly coming to the university students with animals compared. Here they were referred to as pecus campi (German: “Vieh des Feldes”) and equipped for the ritual with teeth, horns and furs, which were then removed with oversized tools. No reference was made to a specific animal species .

However, through the ritual and the subsequent enrollment , the young student lost his animal identity and was accepted into the society of students, even if he had to endure further harassment afterwards as part of the widespread Pennalism .

Live high the foxes and the virgins!

The term “fox” has been documented in early student history sources since the 18th century, here also in the Latin version vulpes (German: “fox”), which suggests an etymological derivation from the term for the canine predator fox .

In the Latin dissertation Dissertatio de norma actionum studiosorum seu by the Burschen-Comment , the oldest known report on special student usage in the German-speaking area, published in 1780, the term vulpes (fox) appears in two paragraphs. In § XII. Some typical insults ("injuria") are listed with which students were referred to who, according to the opinion of the time, did not behave appropriately. These lists were important for the dueling system of that time and the required classification of defamation.

As vulpes a student is referred to here, which lists all too timid and overcautious, making it obvious then exposed to the ridicule of his fellow students. It is also explained that this designation is also common for newly arrived students, which in this case does not constitute a defamation, presumably because such behavior is more typical for new students and one cannot yet expect student behavior from them. In § XIX. the difference between the long-serving student ( burschus , veteranus ) and the newcomer to the university (novitius) is explained. Here the newcomer is publicly declared a vulpes when he is introduced .

The following description can be found in a book by a Göttingen Corps student enrolled in 1811 from 1813 about life at Göttingen University:

“Fuchs is the name of a student in his first six months. The name is not very inappropriate, because the young person who brings high, exaggerated terms from a university; Is worried about the students by the good teachings and rules of life of his concerned parents; believes he sees a celebrity in everyone who meets him ; feels noticed by all people; consequently expresses anxiety in posture, gait, and expression - in fact has many similarities to a fox. After a few weeks these anxious creatures disappeared, and towards the end of the six months usually behave in the opposite way; they often want to fly earlier, before they have wings, and so fall into a different ridiculousness. You can recognize them for foxes regardless. "

Although early sources derive the name fox from the dog-like predator, there are other etymological explanations. For example:

Most followers, however, find a derivative of faex. This term was used earlier for the lowest strata of the population and was possibly carried over to the first-year students as the lowest in the student hierarchy .

Some of these etymologies are often used to explain the later spelling "Fux".

The process of admitting a student as a fox to a student association has various names that differ according to the umbrella organization and association. The terms admission, acceptance, reception and renunciation are common.

For most connections, the date you joined the connection as a fox counts as the official joining date. Only in the corps is the date of reception of greater importance as a corps boy .

If a high school graduate or student is a guest of a student association and shows interest in membership, he is called a Spefuchs , from Latin to be . This is sometimes reinterpreted as the scouting fox eyeing the compound curiously. If they are mutually interested, they will be invited to events and joint activities to get to know the connection better.

A high school graduate who already decides to become a member during his military or community service can be accepted as a military fox in many connections . He is considered a member and receives the corresponding badge , but is "on leave" for the time of his absence from the university location and released from his active duties.

Foxes of the Corps Nassovia Würzburg (1896)

During the Fuchsenzeit, the member of a student union has limited rights and obligations. As a rule, he has no voting rights at most conventions and is not called upon to hold offices. In the vast majority of alliances, however, it is customary for the fox to call each other on the first day of the association with all other liaison members, including the oldest, without any further formalities.

To represent his interests at the convents there are so-called body relationships . For this purpose, the fox chooses a confidante from the circle of full members who is personally at his side. This confidante is called a body boy (sometimes also body father or beer father ), the protégé is then his body fox (also body son or beer son ).

The physical relationships usually develop special lifelong friendships, which often include the later families. Since a body boy can have several body foxes, branched family trees result from body families (or beer families ).

The special care relationship of a boyfriend for his body fox often results in the obligation to give him various couleur objects , which are usually given a dedication. The regulations are very different.

The fox is obliged to familiarize itself with the culture of fraternity, the peculiarities of its association and the traditions of its association. This serves to prepare for the time as a full member, in which he usually takes over offices immediately and has to represent the connection to the outside world. The young full members are also the most important decision-makers in a connection. They are already being prepared for this as foxes.

The person responsible for the training of foxes is in most compounds Cub Major . The fox receives theoretical instruction in the mostly weekly fox lessons, which are held by the fox major. The contents of the fox lessons are essentially

End of the fox time 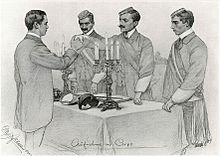 Various conditions are attached to the end of the Fuchsenzeit. It is essential to set a minimum time. It can be between one and three semesters.

It is also important to establish that the fox has the necessary skills to perform the tasks as a full member - for example, representation obligations - without embarrassing the connection. This is usually determined by a test called the fox test , boy test or surf test .

In the case of striking connections, the successful completion of a specified number of lengths is an additional requirement for the final acceptance. Today that is usually one or two, before the Second World War it was usually four. The preparation for the mensures does not take place in the fox lesson , but in the puck lesson , which is led by the fencer , paukwart , second charged or consenior .

Once the responsible convention has decided on the final admission, it will be carried out in a solemn setting as soon as possible without delay. The appropriate color badges (ribbon and cap) are put on and a promise or an oath is usually made on the constitution . Important elements of this solemn act of admission still come from the tradition of the student orders that disappeared in the 18th century .

The act of finally admitting a fox to the compound has different names. Are common designations Reception (especially Corps) and Burschung (at fraternities and Catholic associations).

Fox major and foxes of the Corps Masovia (1926)

In the case of color-bearing compounds, the foxes are often distinguished by a special color . As a rule, Krassfüchse and Brandfüchse wear the so-called fox ribbon , which is usually one color less than the boy ribbon, and sometimes a special student cap .

Different connections divide the Fuchsenzeit into several stages; these are usually:

Fuchsenzeit in the life views of the cat Murr

→ Main articles : The life views of the cat Murr  and Ecce quam bonum

In his history of the Albertina and its students from 1544 to WS 1850/51 , Siegfried Schindelmeiser writes:

“Another insight into student life at the Albertina around 1792 is provided by ETA Hoffmann in“ Kater Murr ”, as recent research has shown (Körner, Convent 1957, p. 82 ff.). The poet describes his life there, how Murr, as a blatant fox, is taken to the pub of a country team and received with cheers by ten neglectful and strangely dressed tomcat boys. He was won over to that circle because Muzius, who wedged him, had made it clear to him that his way of life was no good; he must go out into the world. He shouldn't stay by the stove at home like a cat philistine. This is a pomady guy. A cat boy, however, must be open, honest, hearty and ready to help a friend. He must not show any consideration other than honor and honesty. Before he is accepted on the recommendation of Muzius, however, he has to assure that he does not belong to a prohibited order. Then it goes to the pub that opens with 'Gaudeamus igitur'. When the round song 'Ecce quam bonum' goes around late in the hour and everyone has to sing a verse they have composed themselves, it stops at first, so that some already shout 'pro poena'. But he gathers his willpower so that it sounds:

Paw 'in paw' and chest to chest
Nothing should darken us!
Katz is his fellow uns're pleasure ,
Defy cat philists!
Ecce quam bonum ...

His verses met with the loudest applause. The others pawed him and hugged him to the beating chest. It was the best moment of his life. Murr now led a fresh, happy, and delicious lad's life and liked to see that he 'lost the best hair from his furs in the process' . So it was on scale several times. "

"Old Fox" of a Baltencorps