Funakoshi Gichin ( Jap. 船越·義珍 * 1868 , Naha , † 1957 , Tokyo ; born Ryūkyū Hunakushi Jichin 富名腰·義珍 フナクシ·ジチン ) was champion and founder of Karatedo -Kampfstils Shotokan -ryū while "father of modern Karate do ”in Japan . As one of the last karate masters of the incorporated kingdom of Ryūkyū , Funakoshi was the first to bring the martial art from Okinawa to the heart of Japan on the main island of Honshū and was honorary chairman - 最高 師範 'highest teacher' - of the Japan Karate Association founded in 1949 until his death .

Grew up in Tomari, Shuri on Okinawa - a district in Naha - in the former Kingdom of Ryūkyū (1429–1879) during the Meiji period (1868–1912) - up to the incorporation of the Ryūkyū Islands (1879) by the Japanese Empire - Funakoshi is considered to be Founder of the Japanese karatedō, which is known today (which he named after the Judo of his model Kanō Jigorō ). Later students named the karate developed by Funakoshi after the training place at that time Shōtōkan ( Shōtō - 松濤 - was Funakoshi's pseudonym for poetry and calligraphy, Kan means training hall) - the Shōtōkai ( Kai - 会 - means "association") was the first organization to be founded as an association in order to secure a small livelihood for his teaching activity in Tōkyō. Funakoshi himself never used the term Shōtōkan , this was subsequently introduced by his students in order to be able to differentiate himself from other karate styles.

Although he said he was rather small and sickly in childhood, he began to learn Okinawa karate in adolescence under Master Asato Yasutsune , a karate and sword fighting master of the Jigen-ryū , and under Master Itosu Yasutsune . Funakoshi worked professionally as a secondary school teacher. Nevertheless, karate represented an important purpose in life. He was very keen to spread karate. He succeeded in integrating this martial art into physical education at the school, as predecessors such as Itosu and Higaonna had already suggested at the turn of the century before last.

In 1922, Funakoshi traveled to Tokyo as head of a delegation from Okinawa , where he introduced karate to the Japanese public for the first time. Due to the great interest he stayed in the Japanese capital to continue teaching. In order to earn a living he worked in Tokyo as a caretaker, gardener and cleaner. Only after he had succeeded in making karate better known in Japan was he able to make a living from his activity as a karate teacher - through various university courses and through his students who organized themselves in the Shōtōkai Association.

Funakoshi kept in touch with his karate colleagues from Okinawa and found support from his colleagues Mabuni Kenwa , founder of Shito-ryu, in Osaka and Miyagi Chōjun , founder of Gōjū-ryū, in Kyoto from the mid-1920s.

The style of karate represented by him was derived from his stage name Shōtō ("pine noise"), under which he wrote poetry, and his first real Dōjō Shōtōkan ("House of Shōtō"). Funakoshi himself refused to call his karate his own style or even Shōtōkan karate. For him there was only "one" karate. It was his students who wanted to differentiate their teacher's karate from the karate of other schools.

His division of forms - kata - according to historical origins into Shorin and Shorei ryu was not universally accepted. In Okinawa in particular, Funakoshi had to face criticism. In addition, Japanese nationalism at the beginning of the 20th century forced him to “Japaneseize” the spelling and names of forms and techniques. He renamed various kata (e.g. 内 歩 進 ryūkyū Naifanchi - 鉄 騎 Japanese Tekki ) and simplified step shapes or rearranged sequences for didactic reasons ( 平安 , ryūkyū Pinan - Japanese Heian ). At the urging of his Japanese students, he also increasingly introduced partner exercises (kumite) as they were used to from sword fighting. Japanese terms (Shu-Ha-Ri - 守 破 離 ) and strategies ( Sen-no-Sen - 先 の 先 ) were introduced that were not common in Okinawan karate.

Funakoshi followed a strict code of honor throughout his life . For example, he refused to use “dirty” words like socks or toilet paper. Funakoshi was also a very peaceful man who tried to avoid fighting whenever possible. For example, he once gave the cake to thieves that he had intended as an offering for his ancestors, just to avoid a conflict with the two men who were probably inferior to him. Funakoshi- Sensei's family members are or were excellent karateka as well. B. Funakoshi Yoshitaka or the actress, singer and businesswoman Funakoshi Fane . 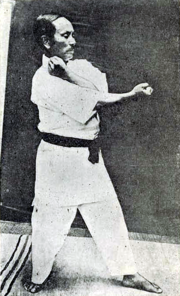 The Shōtō-Niju-Kun are twenty rules of conduct established by Funakoshi and convey the basic principle of karate dō ("path of the empty hand"). They should serve the character perfection.