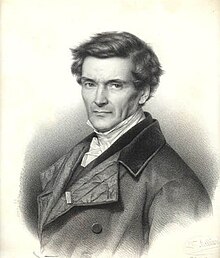 Coriolis was born the son of an officer and later industrialist. He attended the École polytechnique . After his father's death in 1816, the family needed money, and Coriolis took a job as a tutor in analysis and mechanics at the École polytechnique. During this time, he conducted research at different twist movements (eg. As Effet of billiard balls ) and provided the first precise definition of the kinetic energy and mechanical work . In extensive studies of the movements of bodies on rotating surfaces, he dealt extensively with the Coriolis force , later named after him , which is observed from a point of view within the system and the cause of which is the inertia of a body moving in a rotating system. Coriolis also published various papers on business mathematics . In 1836 he was accepted into the Académie des Sciences .

Coriolis was immortalized by name as one of 72 scientists and engineers on the Eiffel Tower .