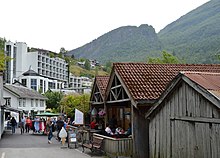 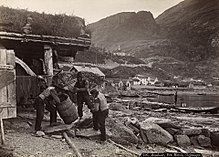 Geiranger, around the 1880s (photography by Axel Lindahl )

Geiranger is a place in the Norwegian municipality of Stranda .

The place is surrounded by high mountains at the end of the Geirangerfjord in the province of Møre og Romsdal and has about 250 inhabitants; in the summer months this number increases to up to 2000 inhabitants. 14 children are currently attending the local kindergarten and 27 children are attending the local school (first to tenth grade). The inhabitants live almost exclusively from tourism; in addition to the Hurtigruten ships, up to 200 cruise ships arrive in the Geirangerfjord and thus in Geiranger every year. In the winter months, the fjord is not navigable because avalanches break out from the surrounding mountains, which then cause high waves.

Car ferries run from Geiranger several times a day through the Geirangerfjord to Hellesylt during the summer season . The Grinddalsfossen waterfall extends east above the town .

A church existed in Geiranger as early as 1450, but the current church building dates back to 1842. The traffic to and from Geiranger was originally largely carried out by water. As early as the 15th century, however, there was a mountain road from Geiranger to Lom in the summer months . In the 1850s, trade on the route had increased significantly. So from Lom pickling, birch bark, falcons, grain, leather and tar were delivered to Geiranger. In return, iron, fish, herring, salt and textiles were transported towards Lom.

The D / S Sunnmöre Geiranger was the first steamship to reach Geiranger in 1858 . In 1867 Martinus K. Maråk opened a first pub in Geiranger. A frequent guest here was Hans Hagerup Krag , who made services to Norwegian road construction. Tourism, which is important for the place, began in 1869. In 1880, Krag suggested building the road from Geiranger high up to Dalsnibba , in particular to further develop tourism. On November 29, 1881, work began on Geirangerstrasse , and in 1882 the Knuten was completed. The inauguration of Geirangerstrasse took place on August 15, 1889, but the Nibbevegen to Dalsnibba was not built until the 1930s. Parallel to the construction of Geirangerstraße, the harbor was also expanded in 1885 to give steam ships better mooring options. In addition, NP Veiberg built the Geiranger Hotell in 1884 . The Union Hotel followed in 1891 .

From the 1890s the German Kaiser Wilhelm II visited Geiranger several times in the period up to 1914.

In fact, tourism continued to grow. In 1907 the Geiranger Skysslag company was founded. It was a group of people active in local tourism who organized excursions for tourists in particular. In 1910 it already had about 36 members. Horse-drawn carriages were built for the transport. The owner of the Union Hotel, Karl Mjelva I founded the Geiranger Vognfabrik in 1907 , which built horse-drawn carriages and then cars. From 1911 onwards, the company built its own car bodies for Opel models. The vehicles had seven to nine seats. From 1913 buses were also produced. A bus service was set up via Grotli to Stryn . As early as 1920, 112 tourist ships were counted in Geiranger. Tourism grew significantly in the 1920s and 1930s. Excursions to the nearby mountains were organized with the travelers arriving in Geiranger by ship. At peak times, more than 100 vehicles were already being used to transport tourists. In 1955, the Adlerstrasse to Eidsdal was inaugurated.

On the initiative of Karl Mjelva II , the Norsk Fjordsenter museum was built in Geiranger and opened on June 14, 2002 by Queen Sonja of Norway .

Geiranger was also one of the locations in the Norwegian disaster film The Wave . The hotel discussed in the film actually exists in a modified form.