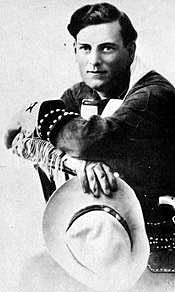 Gilbert Maxwell Anderson , born in Maxwell Henry Aronson , (born March 21, 1880 in Little Rock , Arkansas , † January 20, 1971 in Woodland Hills , California ) was an American actor, director, producer and screenwriter. With the figure of Broncho Billy embodied by him, he created the first western hero in film history .

Born under the name Maxwell Henry Aronson , he was one of seven children of a Jewish family and grew up in Pine Bluff and St. Louis . At the age of 18 he went to New York and worked as a model and newspaper delivery person before starting as an actor at the Vaudeville Theater.

From 1902 he also worked for Edison Studios as an actor and screenwriter. He played three roles in Edwin S. Porter's early film The Great Train Robbery . After enthusiastic audience reactions, he went fully into the film business with his stage name Gilbert M. Anderson and was employed by Vitagraph and Selig . In 1907 he founded the film company Essanay (English "S an 'A", S for Spoor and A for Anderson / Aronson) together with George K. Spoor in Chicago , which in the 1910s was one of the leading studios and numerous stars of the silent film era created. In 1907 Anderson turned The Bandit Makes Good, the first of a series of 148 westerns in which he played the cowboy "Broncho Billy". In this role, Gilbert M. Anderson became legendary. Spoor ran the company in Chicago, while Anderson made films in the western US. In 1912 they went to Niles in sunnier California .

At the end of 1914 he was able to win Charles Chaplin as a replacement for Augustus Carney , the retired star of the successful Essanay comedy western series Alkali Ike . Anderson made a guest appearance as an actor in one of Chaplin's 14 films for Essanay, The Champion , after which Chaplin returned the favor with a guest appearance on Anderson's His Regeneration . After Chaplin's departure in 1916, Anderson sold his company shares to his partner Spoor and - as contractually agreed - withdrew from the film business for two years. During this time he produced plays in New York. He started his comeback, but disputes with Metro Studios made him refrain from acting again after 1920. Instead, he took over the production and direction of short films with Stan Laurel , including his first film with Oliver Hardy : A Lucky Dog . After 1923 he finally withdrew from film work.

Around 1950, Anderson and his daughter Maxine (born 1908) tried in vain to publish a compilation film with the western hero Broncho Billy . In 1958 Gilbert M. Anderson was awarded an honorary Oscar for "his contribution to the development of film as an entertainment industry" . A star on the Hollywood Walk of Fame at 1651 Vine Street today commemorates him. In 1998 he was depicted on a US postage stamp and in 2002 he was inducted into the Western Performers Hall of Fame at the National Cowboy & Western Heritage Museum in Oklahoma City . A “Broncho Billy Silent Film Festival” is held annually in Niles, the Californian headquarters of Essanay Studios.