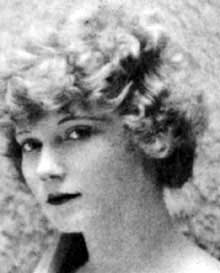 Marianna Michalska - according to other sources her name was originally Marianna Winchalaska - was born in Poland. There are even different details about her place of birth; some also mention the Polish capital Warsaw . She came to the United States with her parents at the age of eight , where they settled in Milwaukee , Wisconsin . As the family lived in poor conditions, her parents arranged for their daughter to be married to John Gorecki, the son of a saloon owner , when Marianna was around 14 years old. At a young age, she also became the mother of a son.

In order to earn money, she began to work as a singer and dancer in her father-in-law's saloons. At that time she built the shimmy into her choreographies and was instrumental in making this dance popular in the 1920s. Michalska, suspected of success, then left her husband and child and moved to Chicago ( Illinois ), where they the agent Frank Westphal met who took her under contract and to New York City ( New York took). It is Westphal's wife, thanks to the singer Sophie Tucker , that Marianna Michalska became Gilda Gray.

From July to October 1919 Gilda Gray was in Jacob J. Shubert's theater production The Gaieties of 1919 for the first time on Broadway on the stage. In the same year, she also made her debut as a silent film actress in A Virtuous Vamp by director David Kirkland . In 1922 she appeared in the Ziegfeld Follies of Florenz Ziegfeld Jr. and became even better known. In all of her appearances, she impressively demonstrated her knowledge of shimmy, so that the dance became relatively successful, especially in the USA in the 1920s.

In 1923, Gray divorced her first husband, John Gorecki, to marry her new manager, Gaillard T. "Gil" Boag, that same year. She moved with him to Hollywood ( California ) to advance her career here as well. She opened a vaudeville show that made her up to $ 47,000 a week. Her most commercially successful film was the comedy Aloma of the South Seas , which grossed $ 3 million in three months in 1926. Gray's last major appearance followed in 1929, as the leading actress in the feature film Piccadilly . Their second marriage ended in divorce in 1927.

As a result of Black Thursday in October 1929, she lost almost all of her belongings. She also suffered a minor heart attack in 1931 , from which she hardly recovered throughout her life. In May 1933 she married the Venezuelan diplomat Hector Briceño de Saa; the divorce followed five years later in 1938. Her professional success also stalled, as she only found employment as an actress twice in the 1930s, most recently in 1936 in a supporting role in the comedy film Rose-Marie .

In 1939, shortly before Hitler's troops marched in, she managed to escape from Poland. During the war years she raised funds and supported the Polish government- in- exile in London . In recognition of this, she was awarded the Cross of Merit of the Republic of Poland .

She hit the headlines again in 1946 when she sued the producers of the film Gilda , claiming the drama was based on her life. The film in which Rita Hayworth played the lead role had nothing to do with Gray's life story in the end; however, an out-of-court settlement agreement was reached with which Gray acquired a farm in Colorado . However, she could hardly get this financially, so that she was again destitute by 1953.

She spent the last six years of her life as a lodger in the apartment of Antonio Raio, an employee of the Warner Bros. Company. Here she suffered a fatal heart attack in December 1959 at the age of 58 .

She was given a star on the Hollywood Walk of Fame .