Greene Vardiman Black (born August 3, 1836 in Winchester , Illinois , † August 31, 1915 in Chicago ) was Professor of Dentistry at the University of Chicago. 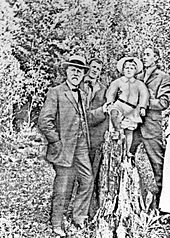 He was one of eight children of a farmer and craftsman and originally had a strong aversion to school, which he therefore only attended sporadically. At the age of 17 he joined his older brother Thomas, who ran a medical practice in Clayton. For four years he acquired a comprehensive basic knowledge of medicine there. At the age of 21, he sat in a dental practice for four months and then opened his own dental practice in Winchester. Through his friendship with a watchmaker , he acquired additional fine-technical knowledge. In 1864 he moved to Jacksonville , where he became acquainted with the writings of Virchow and Darwin . After Illinois' first medical practice law was passed in 1878 , Black, who had only had about 20 months of elementary schooling and not a single college class, took the exam, which he passed with excellent grades.

Black autodidactically acquired extensive chemical knowledge and set up his own chemistry laboratory. He was even asked to teach a chemistry class for the Jacksonville high school teachers. In order to be able to understand the scientific writings that were often written in German at the time, he asked a dealer of German origin to teach him German and read Virchow in the original. Stimulated by this, he developed a great interest in cellular pathology , bought a microscope and once again became the only pathologist in the area through self-study . In 1870 he received an invitation from the Missouri Dental Colleges , there histology and microscopy to teach, and later pathology and oral surgery . In 1878 he received an honorary doctorate in dentistry. In 1883 Black moved to Chicago, where he first taught at the dental clinic and from 1885 at the Chicago College of Dental Surgery . From 1890 to 1891 he also lectured at the University of Iowa . In 1891 he was appointed professor of bacteriology and pathology at the newly created Northwestern University Dental School in Chicago. In 1897 he became dean of the university.

The numerous scientific works and publications include the works " Dental Anatomy " from 1890 and " Operative Dentistry " in two volumes from 1908. His last book, A work on special dental pathology , he completed in 1915 shortly before his death. He is the inventor of the phagodynamometer , a device for measuring chewing force.

He set up Black's rules for cavity preparation in filling therapy . Originally developed for gold hammer fillings , they were later used in modified form for amalgam fillings :

His principle of extension for prevention has now largely been overtaken by the adhesive minimally invasive filling technique with composite materials and is only used in teeth that are very prone to caries.

Black devoted much of his research to the material properties of amalgam . This included investigations into the shrinkage behavior, processing, aging and durability of amalgam fillings . For this purpose he developed several measuring devices, including a micrometer coupled with a dynamometer .

After him the endemic occurrence of the dentists McKay, Burton and Wilson strange "spotted teeth" ( Engl. : Mottled teeth, mottled teeth) among residents of Colorado Springs had been reported, he visited in 1909 this city to stand out from the phenomenon of an image close. His histological investigations were published shortly after his death as part of a series of articles on stained teeth, in collaboration with Frederick Sumner McKay , in the journal "Dental Cosmos" (1916). However, it was to take another 15 years before McKay, through comparative drinking water studies by the chemist Harry V. Churchill, was able to blame an excessively high fluoride content in the local drinking water as the cause of dental fluorosis .

The Pierre Fauchard Academy has elected Greene Vardiman Black to the International Hall of Fame of Dentistry .