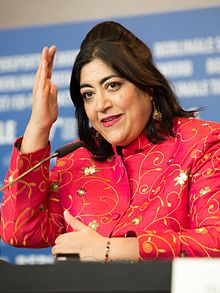 Gurinder Chadha at the Berlinale 2017

Gurinder Chadha , OBE (born January 10, 1960 in Kenya ) is a British film director. Your films deal with the lives of foreign children .

Gurinder Chadha comes from a Panjab Indian family. She was born in Kenya, but her parents moved to Southall , London , after the country gained independence in 1961 . Chadha first worked as a radio reporter for the BBC. In 1989 she made the documentary I'm English but ... about the life of young British people of Asian origin for the television station Channel 4 . The following year she founded her film production company Umbi Films . Her first major film was Bhaji on the Beach (1993).

The director achieved international fame in 2002 with the women's football film Kick it like Beckham . In addition to the leading actress Parminder Nagra , Keira Knightley had her breakthrough as an actress in this film . The Jane Austen film adaptation, Love rather Indian (2004) with the Indian actress Aishwarya Rai in the lead role, was also successful .

After that Gurinder Chadha appeared several times on British television. In the BBC show Your London (2005) she told the story of a Sikh prince who lived in London in the 19th century. In 2006, she followed the BBC series Who Do You Think You Are? the traces of their own Sikh family to their roots in Kenya and the Indian Panjab .

On February 12, 2017, her film The Star of India (Viceroy's House) had its world premiere at the Berlinale 2017 , where it was shown outside of the competition. Chadha and her husband wrote the script, which was inspired by the experiences of their own ancestors.