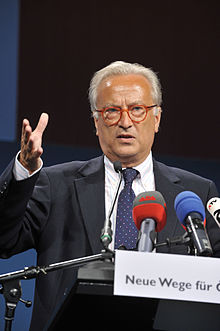 Hannes Swoboda , actually Johannes Swoboda (born November 10, 1946 in Bad Deutsch-Altenburg ), is an Austrian European politician ( SPÖ ). After serving in the Vienna city government from 1988, Swoboda was a member of the European Parliament (MEP) between 1996 and 2014 , as well as long-time President and Vice-President of the Group of the Progressive Alliance of Social Democrats in the European Parliament (S&D).

Swoboda was elected to the local council and state parliament in 1983 . In 1988 he became the leading city councilor for urban planning and urban development (see state government and city senate Zilk II , Zilk III and Häupl I ).

Understanding of “EU sanctions against Austria”?

In terms of domestic politics, Swoboda was criticized by Jörg Haider in 2000 because, in the opinion of commentators in a letter, he understood the sanctions of the then 14 other EU states in Austria (refusal of bilateral talks and high-level contacts with the new black-and-blue federal government ( key I ) because of the lack of differentiation between the FPÖ and right-wing extremism). (At that time the SPÖ was accused by right-wing circles of having “ordered” the “sanctions” from the other EU states. However, these measures were then assessed as counterproductive and lifted in September of the same year.)

Head of delegation in the European Parliament

Within the party, Hannes Swoboda was involved in disputes in 1999/2000 because the then SPÖ Federal Chancellor Viktor Klima selected the non- party publicist Hans-Peter Martin as the SPÖ's top candidate in the 1999 European elections in Austria . After the election, however, the other SPÖ-EP MPs under Swoboda's leadership refused to elect Martin as their head of delegation, and chose Swoboda in this role. Martin has since been a non-attached MEP. In the European elections in Austria in 2009 , Swoboda was again the top candidate of the SPÖ. The SPÖ received 23.7 percent of the vote (after 33.3 in the 2004 election); the list of Dr. Martin , intensely supported by the Kronen Zeitung , received 17.7 percent (after 14.0% in the 2004 election).

In July 2009 Hannes Swoboda was elected Deputy Chairman of the Group of the Progressive Alliance of Socialists and Democrats in the European Parliament (S&D). Because of this function, he no longer ran as Head of Delegation of the PES .

In January 2012, Hannes Swoboda succeeded Martin Schulz as President of the Group of the Progressive Alliance of Socialists & Democrats in the European Parliament. In the elections to the European Parliament in spring 2014 , Swoboda no longer stood as a candidate and thus ended his political career with the resignation of the presidency in June 2014. Gianni Pittella was elected as his successor .

In 2000 he became chairman of the International Expert Commission on Historic Center Berlin and developed a usage concept for the Berlin City Palace . Under the term Humboldtforum , which he presented, he presented the final report to the then Federal Minister for Transport, Building and Housing Kurt Bodewig and the Governing Mayor of Berlin Klaus Wowereit on April 17, 2002 .

Statements on the 2008 economic crisis

In a chat about the EU and the current economic crisis in the daily newspaper Der Standard , Swoboda replied in October 2008 to the question about the effectiveness of the government's two trillion euro financial guarantee:

Unfortunately, it was necessary to give these guarantees, but firstly this money is not available and secondly, if it were called in, there would be a real economic catastrophe. But the signals of security associated with this sum were necessary. But fundamental reforms of the financial sector must follow ... [in order] to avoid something similar.

Swoboda is married to Brigitte Ederer , a former Austrian State Secretary and later Vienna City Councilor for Finance, who was subsequently a member of the Management Board of Siemens AG until 2013 and was reappointed to the Supervisory Board of the Austrian Federal Railways in 2020.

In his free time, Hannes Swoboda takes photos and paints; In June 2010 he showed his own pictures at an exhibition at the Wiener Kabelwerk .