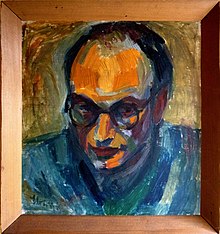 Hans Bemmann was born on April 27, 1922 in the city of Groitzsch near Leipzig . The son of a Protestant pastor spent his youth in Grimma / Saxony, Leipzig, Wiesbaden and Vienna. In 1940, Hans Bemmann first began studying medicine in Vienna, interrupted by labor service, the Wehrmacht and military service in Russia, where he was deployed as a surgical assistant in main dressing stations. After the end of the war he continued his studies up to the Physikum . Immediately afterwards, however, he switched to German and musicology, which he completed in 1949 at the University of Innsbruck with a musicological doctoral thesis. From 1954 he was a lecturer at the Österreichisches Borromäuswerk ( Austrian Library ) and continued this activity in Bonn in 1956. Until 1987 he was a lecturer there, until 1993 lecturer at the Bonn Librarian Teaching Institute and from 1971 to 1983 lecturer for the subject “German” at the University of Education in Bonn. In the 1960s he published under the pseudonym Hans Martinson.

His literary breakthrough came in 1983 with the fairy tale novel Stein und Flöte , which is close to fantasy literature and follows the adventures of a young man named Lauscher in an idyllic fairytale world . A magic stone and a magic flute should actually open the way to happiness for him, but his lack of knowledge of human nature and naivety let him abuse his power and make fateful decisions. Lauscher's life story is interwoven with his love story.

The follow-up novel Erwin's Bathroom , written in the form of a series of letters, leads the reader into a dictatorship that controls the population through a systematic simplification of language. The good-natured linguist Albert S. accidentally stumbles into an underground movement that Erwin directs from his illegal microfiche library out of his bathroom. Albert finds the love of his life at the same time and learns to see the world anew through ambiguous language. The idea of ​​manipulation through the targeted use of language can also be found in George Orwell's Dystopia 1984 .

The star of the brothers is also located in the modern world and traces the life of two brothers in a society that is on the way to dictatorship. A musician and a geologist choose opposite sides in the political spectrum, only to meet again at the end.

The damaged goddess takes a fairy tale researcher on a journey from reality to the world of fairy tales. The encounter with a woman who charms him throws him into a fairy tale world in which he searches for her, woos her and ultimately finds her. The novel mixes our world with that of fairy tales and lets the hero see our world less coldly and mechanically.

The Gardens of the Lioness , although read as a novel in its own right, is a continuation of the damaged goddess , in which the woman tells her story. This book differs from the previous novel in terms of the choice of words and sentence structure, so that the author was able to impressively depict a different world of sensations.

In 1987 he received the Evangelical Book Prize and in 2002 the Rheinische Literaturpreis Siegburg .