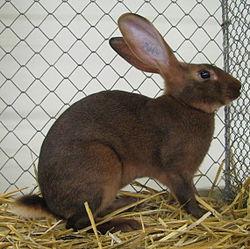 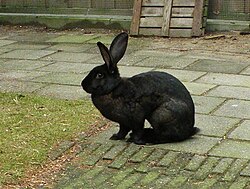 The rabbit is a medium-sized (3.5 to 4.5 kg) rabbit breed with a characteristic body shape.

Appearance and characteristics of the rabbit

The rabbit shows a typical body structure that differs from the body shape of the other breeds. The rabbit's body is slender and elongated. The legs are long and slender, the belly pulled up high. Rabbits show a typical high position. The head is slender, longer and straighter than that of the rest of the rabbit breeds and sits on a highly erect, clearly visible neck. The original color scheme shows the typical hare color, a wild-colored fur that is colored bright red-brown due to the effect of additional yellow intensifiers. The corresponding hereditary formula is:

History of the breed

The rabbit comes from Belgium and - like the giant rabbit - was bred from land rabbits by selection. According to Joppich, Belgian rabbits with the typical red color were first mentioned in 1860 . Today's typical body shape was completed in Great Britain , where large quantities of slaughter rabbits were exported from Belgium in the 19th century (according to Joppich between 1870 and 1880 ). Joppich quotes Wilkens that in 1874 the Lunsh brothers in Grimsby received the first red-colored animals from transports of Belgian rabbits for slaughter. From 1890 there was the so-called “Belgian Hare Boom”, in which the animals were exported to the USA , where the rabbit was considered a particularly good economic breed. The import to Germany was carried out by the Leipzig publisher (especially small animal literature) Dr. Fritz Poppe, who showed the animals for the first time in Leipzig in 1900 . The breeding of the breed took off on a large scale; After 1933, however, it was classified as a sport breed by the Reich Committee for Rabbits of the Reich Association of German Small Animal Breeders and thus lost its distribution. Today rabbits can be seen regularly at exhibitions; the red-brown color is the most common.

The body shape of the rabbit is unique. The coat color of the original type can also be found in the Deilenaar and as a color in other breeds. The red of the rabbit has been transferred to the Red New Zealander and the rabbit among others .