This article treats the headset as a two-way communication tool. For the use of headsets without loudspeakers in performances or television productions (neckband microphone ), see wireless microphones . 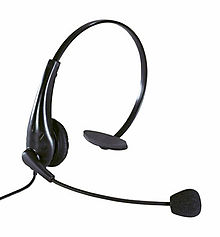 A headset (German headset , headphone or headset set ) is a combination of headphones and microphone that enables two-way communication (listening and speaking). The English name headset has also established itself in the German-speaking world .

With its technical components, a headset fulfills the same tasks as a telephone receiver . The advantage is the freedom of both arms. Headsets are therefore enjoying increasing popularity, especially when working on computers , laptops , PDAs or in connection with a mobile phone . The low price is also beneficial.

There is often a volume control in the connection cable . With professional solutions (e.g. for call centers ) the microphone can be muted at the push of a button.

As a rule, headsets use an electret microphone , which requires electricity to operate , which is supplied to it by means of remote power , which z. B. happens via the jack socket of a computer.

Headphones with two ear cups (binaural) and microphone on the bracket
Stereo playback is possible through the two speakers . The perception of the environment is restricted, which can be assessed positively or negatively depending on the application and situation. This is a common design for use on computers, in amateur and aviation radio . Light versions with a neckband are also available, especially for use on computers.
Headphones with only one earpiece (monaural) and microphone on the bracket
Since there is only one loudspeaker, only mono playback is possible. The perception of the environment is less restricted. This design is very popular in telephony and corresponds most closely to a telephone receiver.
Ear canal headphones ( in-ear headphones ) with a microphone attached to the cable
The smallest and lightest variant is often used in cell phones . Stereo playback is also possible for versions with two earphones. Due to its inconspicuousness, outsiders can think that the user is talking to himself.
Wireless headsets
A wireless connection based on the Bluetooth or DECT process means that there is no need for a cable. This design is also often used with cell phones. Due to the built-in technology, the headset is slightly heavier than wired earphones. The main purchase criteria are mostly the voice quality and, depending on the built-in battery , the standby and talk time.

A common use case for headsets is on workstation telephones. Different connections are used depending on the phone manufacturer. These differ in the connector used and in the pin assignment even if the connectors are the same. RJ-9 or RJ-11 plugs are often used. In addition, the electrical properties (e.g. impedance ) and the scope of functions are different. In addition to the audio data, the call signal can also be transmitted on the headset interface or the call can be accepted by the headset (AEI, DHSG and EHS).

The wired connection is the usual way of connection. The adaptation to the type of telephone takes place either via a corresponding connection cable, which usually ends in a so-called QD plug connection (abbreviation for “ Q uick D isconnect” or “ Q uick D etachable”). This QD connector is then again defined by the headset manufacturer. The adjustment of the electrical parameters is mostly only possible by using a headset that is matched to the telephone.

The wireless connection z. B. via Bluetooth is only supported by a few phones. Therefore, most wireless headsets are wired to the phone with a base. The base then communicates with the headset via Bluetooth or DECT and functions as a base station. Programming switches or software setting options on the base are used to adapt the base to the telephone. Modern base stations have z. Sometimes a separate display, with which a setup assistant helps to configure the headset correctly. In addition, z. Connection cords adapted to the telephone are sometimes used.

The base stations often also have an input for the PC ( jack or USB ). The headset can be used universally for both devices, e.g. B. for writing down dictations and making calls. Switching between the devices takes place either at the base station or via the headset interface to the telephone (AEI, DHSG and EHS).

DECT headsets are a special form of telephone headsets that can be registered with the DECT system of a telephone system. This allows the range to be increased, especially in systems with several DECT transmitters. However, this variant could not establish itself on the market.

The earliest mobile phones had many incompatible connections. The most common were:

Smartphones use either Bluetooth headsets or 3.5 mm jack plugs with a pin assignment from the Cellular Telecommunications Industry Association (CTIA).

To transmit stereo audio and a mono microphone channel, the tip is used to transmit the left audio channel and the first ring is used to transmit the right audio channel. With the assignment according to the CTIA, the ground is on the second ring and the microphone channel on the third ring or the socket. Further variants of the assignment are shown in detail under the jack plug . With this pin assignment, the plug can be used in a 3-pin socket with and without a dedicated contact spring, as well as normal headphones without any problems in a 4-pin socket. The pin assignment is used by Apple ( iPhone , iPad , iPod and MacBook ), Xbox One Stereo Headset Adapter, HTC, as well as newer Nokia, Samsung and Sony phones, as well as in some notebooks from HP, Lenovo and Dell, as well as in other devices. For some, especially older, cell phones, the pin assignment may differ from the variants described above. Standard accessories may then only be used with adapters.

A simple headset is connected to the computer via one or two jack plugs . Desktop PCs and older notebooks use two jack plugs, one for the speaker and one for the microphone. With current notebooks and cell phones, a four-pin jack plug is usually used (see also jack plug with additional function ). With the right adapters, a headset can be used on the other port.

Surround sound headsets (so-called hands-free devices) are connected either with a jack plug to the sound card or via USB to the PC. In the variant with a sound card, three plugs must be connected to the inputs of the sound card . One connector each is used for the front speakers, for the bass or center speaker and for the rear speakers. With such a solution, of course, the sound card must support surround sound reproduction.

A more complex variant has a USB connector for connection to a computer. These devices have built-in digitization that can improve voice quality and make an analog input on the computer superfluous.

Another variant increases the bass sensation by vibrating the auricles. The energy required for this is taken from batteries, a power supply unit or, for use on a computer, from the USB port.

Modern wireless Bluetooth headsets from cellular networks can now also be operated on a PC without any problems. To do this, it requires Bluetooth hardware that is integrated or retrofitted using a USB stick and a Bluetooth software stack (software suite). Depending on the headset design, two additional functions are available on the PC under "Sounds and Audio Hardware", these are:

Both functions can also be used at the same time; for an incoming VOIP call, the PC Bluetooth software mutes an AD2P music playback. While only one headset can be defined for telephony at a time, it is possible to connect several AD2P music-playing headphones to a Bluetooth PC. Some headsets also have function keys that can be assigned to PC software. B. Accepting a Skype call directly by pressing a button on the Bluetooth headset possible (requires additional software). In the telephony area, this is achieved through additional EHS (Electronic Hook Switch) functions. The DHSG interface (wireless headset) is also becoming more widespread, both on the headset and on the telephone.

Some wireless headsets use the DECT standard, with high demands on the acoustics with CATiq . They are primarily intended for telephony ; Compared to Bluetooth, they offer a greater range and thus greater flexibility for the user, since depending on the model, manufacturer and environment in which the headset is used, they can move up to 150 meters from the base station without losing the connection. Some DECT headsets are also compatible with GAP and can be paired directly with a base station. In addition to the regular telephone, some models also connect to a PC via a USB port.

To phone
Headsets are particularly popular in call centers because they allow you to make calls and work on your computer at the same time. Even with the IP telephony with computers headsets are often used. Compared to special telephone receivers, which are usually connected to the computer via USB , headsets can also be used as pure headphones and are therefore more widespread.

aviation
Here headsets are often used to carry out radio communications. In small airplanes and helicopters , noise-reducing headsets are mostly used passively or actively for reasons of hearing protection .

Amateur radio service
In amateur radio , headsets are used, especially for competitions and for connections with weak stations, and for voice radio usually in combination with a hand-held button ( PTT ).

Computer games
In computer games over a network (now also over the Internet with programs such as TeamSpeak ), the players in a group can use a headset to exchange their strategies. Therefore (and also because they can be set up faster than "normal" speakers, usually do not require an additional power supply and do not allow others to overhear) a headset is an important tool for attending a LAN party .

As a microphone
The microphone in a headset is optimized for the voice frequency range and for close-up discussions. For other areas of application it is only an emergency solution. The headphones should be switched off for this so that there is no feedback .

Event technology
Sound and lighting technicians as well as cameramen use what is known as an intercom for communication at larger events , in which the participants in the conversation are connected to the base station using a beltpack via an analog cable connection and can be routed from there to different communication channels . Headsets are mostly used here to shield the ambient noise and to improve speech intelligibility and thus less disruptive communication for the audience (speech at room volume is usually sufficient even in loud concert environments).

An important aspect of headsets is the ability to block out background noise and direct structure-borne noise (wearing noise) from the user. In addition to mechanical measures in the microphone suspension, microphones with directional characteristics are also used here. Many digital headsets also have active interference suppression via DSP . They have several microphones for this. In addition to the useful microphone, an outside microphone primarily picks up ambient noise. The signals are then compared with one another in the DSP and the interference signals are calculated out.