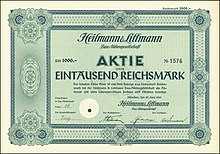 It goes back to the J. Heilmann construction business founded by Jakob Heilmann (1846–1927) in Regensburg in 1871 , which initially focused on building railways and, after moving to Munich in 1877, mainly on building construction . In 1892, when the architect Max Littmann (1862-1931), Heilmann's son-in-law, joined the company, Heilmann & Littmann oHG (from 1897 in the legal form of a GmbH with Richard Reverdy as a further partner and managing director), which apart from building residential buildings and villas specialized in the construction of theaters and other monumental structures and soon became one of the largest construction companies in southern Germany. The most famous buildings erected by Heilmann & Littmann include the Hofbräuhaus am Platzl (1896–1897) and the Prinzregententheater (1900–1901) in Munich. The company was also responsible for expanding the business arcades in the new Munich City Hall .

After Jakob Heilmann's death, the construction businesses in Munich, Nuremberg and Berlin were taken over by Heilmann'schen Immobilien-Gesellschaft AG , which had been founded in 1897 , which resulted in Heilmann & Littmann Bau-AG in 1934 after various changes to the structures and companies . At the end of the 1970s, it was taken over by the Schörghuber group of companies . This decided the 1980 merger with KG Sager & Woerner to form Heilit + Woerner Bau-AG , but sold it to Walter Bau AG in 1988 for a symbolic price of one mark . A formal merger of H + W with Walter Bau AG took place in 2000. The spun off road construction division has been called Walter-Heilit Verkehrswegebau GmbH since then . After the collapse of Walter Bau AG, united with DYWIDAG , u. a. Walter-Heilit Verkehrswegebau GmbH was taken over by STRABAG and operated as HEILIT + WOERNER Bau GmbH from August 1, 2005 to the end of 2014 .