Tramsen (with pipe) in Katyn

Tramsen in the commission (6th from left, all towering, 1943)

Signatures of the commission members on April 30, 1943 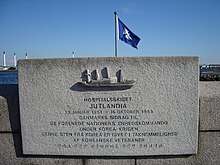 Helge Andreas Boysen Tramsen (born August 30, 1910 in Copenhagen ; † April 1, 1979 ) was a Danish forensic doctor . He was a member of an international medical commission whose autopsies were supposed to help clear up the Katyn massacre in the spirit of Nazi propaganda .

Tramsen was born into a middle-class family in Copenhagen. After his medical exam at the University of Copenhagen in 1936, he married a British woman, joined the Navy and began training in surgery. From 1940 to 1943 he was a prosector at the University's Forensic Medicine Institute. After the German invasion of Denmark , Tramsen was involved in civil resistance against the German occupation. In this area, his assignment was also discussed in a group of international forensic doctors for whom the German Foreign Ministry had also sought a representative in occupied Denmark . Even after his return from Katyn, Tramsen was involved in resistance activities, for example in an attack on a German weapons depot in July 1944. He fell into the hands of the Gestapo and escaped certain death only through his status as a “Katyn Witness”. Until the end of the war he was imprisoned in the internment camp Frøslev .

After the end of the Second World War Tramsen worked as a surgeon, as a resident doctor and as a naval doctor with the rank of lieutenant colonel in the Danish Navy and had teaching positions at Copenhagen University. He took part in the UN mission of the Danish hospital ship "Jutlandia" during the Korean War. For this he received the Dannebrog Order . For the Danish government he took part in a conference on the further development of the Geneva Convention . Tramsen was the chief doctor in the Danish Navy until 1970.

Tramsen's daughter married a Polish artist and lived in Warsaw , where she died in 1971 of gas poisoning in her apartment under unknown circumstances.

Investigation of Katyn in 1943

In February 1943, the mass graves were discovered by members of the German Wehrmacht , and Joseph Goebbels wrote in his diary on April 14, 1943 that they were to be used for propaganda purposes. The exhumation of the bodies in Katyn began in April under the direction of Gerhard Buhtz . A twelve-member international commission was recruited by the German Reich Health Leader Leonardo Conti , which accompanied the exhumation on April 28 and 30, 1943, carried out its own investigations and prepared a report. Since the head of the Copenhagen Forensic Medicine Institute, Knud Sand , was able to evade the demands of the Germans because of his walking disability, Tramsen was named on April 22, 1943 "by the Danish Foreign Ministry" and "by the Danish Admiralty" as a Danish expert. Tramsen also discussed with the Danish resistance group of which he was a member. She advised him to participate. Tramsen had already read the German version of the finds in Katyn in the Danish press. In Katyn, Tramsen carried out an autopsy on a body he had chosen. Tramsen found the military ID of the Polish officer and chemist Ludwig Szyminski from Krakow in the corpse's clothing . He asked to be allowed to take the skull of the dead person he was examining as evidence. In Berlin, Tramsen met with a contact from the Danish resistance group, who gave him photos of the Möhne and Eder dams. Tramsen smuggled the photos, hidden under the skull of the Polish soldier, to Copenhagen.

The report was handed over to the Reich Health Leader Conti by Ferenc Orsós from the group of international forensic doctors in Berlin on May 4, 1943 . The commissioners had agreed not to make any further public statements. Nevertheless, back in Copenhagen, Tramsen passed on his findings to the Danish resistance, from where they also reached England. Tramsen was asked personally by the German governor Werner Best to give lectures in Denmark, and the "German Institute" in Copenhagen offered him an amount of $ 50 per lecture, which Tramsen refused.

In the verdict of the Nuremberg trial , the Katyn massacre, which from the Soviet point of view should be included in the indictment against the German war criminals , was excluded. In Nuremberg, Commissioner Markow had revoked his testimony from 1943 and made statements that supported the Soviet point of view. The Czech Hajek had also revoked it on March 10, 1952. The Yugoslav Miloslavić and the Slovak František Šubík had been put under pressure from their communist governments, so that both had to flee abroad. Pressure had also been exerted on the Italian Vincenzo Mario Palmieri from the KPI . Ferenc Orsós had to flee Hungary as a member of the Hungarian National Socialist Arrow Cross and found refuge in the Federal Republic of Germany from being punished for his involvement in the persecution of Jewish colleagues in Budapest .

During the Cold War , the American Congress set up a commission of inquiry that met in Frankfurt from April 21 to 26, 1952. Tramsen was questioned as a witness on April 23 and 26, 1952 in Frankfurt, where he and Orsós, Palmieri and Miloslavić, who were also questioned, confirmed the investigation methods and test results from 1943.