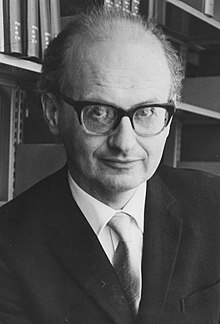 Imre Lakatos (born November 9, 1922 in Debrecen , Hungary , † February 2, 1974 in London , England ) was a Hungarian mathematician , physicist and scientific theorist . In his epistemological contributions he mediated between the falsificationism of Karl Popper , the concept of the paradigm by Thomas S. Kuhn and the "epistemological anarchism" of his friend Paul Feyerabend .

Lakatos was born in Hungary as Imre Lipschitz. In order to avoid persecution by the Horthy regime and to disguise his Jewish origin - he was able to evade the Hungarian Jewish laws - Imre Lipschitz changed his name during the Second World War, first to Imre Molnár and after the war to Imre Lakatos.

He studied mathematics, physics and philosophy in Debrecen and deepened his knowledge in Budapest and Moscow . In 1948 he was involved in preventing the teaching of Freudian psychoanalysis in Budapest. He was scientifically and politically very active, but was imprisoned for a long time for " revisionism ". After fleeing to the West in 1956, he continued his studies in Cambridge. He got several jobs as a lecturer and was a professor at several universities.

In addition to work on mathematical proof theory, which was influenced by the Hegelian and Marxian dialectics , Lakatos tried to build bridges between the concept of falsification represented by Karl Popper and the development of science as presented by TS Kuhn .

He died in 1974 of an intracerebral hemorrhage .

Lakatos was friends with Paul Feyerabend , with whom he u. a. debated philosophy of science in letters. The two are said to have planned to write a book together: Against Method , Feyerabend's most famous publication, should be his contribution to it. However, since Lakatos died unexpectedly without having written his part, the planned book could never be created.

The view that theories must be given up completely if they are falsified, ie refuted by experimental or empirical results, was rejected by Lakatos as “naive falsificationism”. His criticism concerned three things:

A new theory should, however, always have an epistemological and empirical excess over the old theory (“progressive problem shift”).

A completely new theory, which is not just a further development of an old one, also has a positive and a negative heuristic . According to Lakatos, a “positive heuristic” is what a research community hopes to achieve in terms of knowledge with the new theory. The "negative heuristic" is a hard core of core beliefs that must not be given up under any circumstances or against any facts.

For example, according to Lakatos, the three Newtonian laws as part of the core of Newtonian mechanics cannot be refuted. Only through the introduction of additional falsifiable laws (law of gravitation, Coulomb's law, etc.) are Newton's laws extended to testable theory. Falsification of a theory consisting of Newton's laws plus force laws does not lead to the abandonment of Newton's laws, but only to a modification of the force laws. In principle, Newtonian mechanics was only abandoned when a new, more powerful research program became available through the special theory of relativity .

Lakatos assumes that theories can never be assessed in isolation, but only as parts of larger systems of theory and method rules, so-called “research programs”. His concept of the research program is related to Kuhn's concept of paradigm. Theories are usually structured as research programs so that they continue to contain clear assumptions and rules about how they are constructed and how they should be further developed.

In contrast to Kuhn, however, Lakatos is of the opinion that different research programs can be compared and discussed rationally. Science can advance and develop sensibly. Lakatos, however, does not see the progress of science as a continuous approach to the truth, but as a series of problem shifts that constantly bring us to a higher level.

Components of a research program:

Further expansion of the research program or the system of theory results in degenerative problem shifts. This immunization against falsification allows the introduction of ad hoc additional assumptions. Although these additional assumptions may contradict each other, they are valid and do not refute the hard core.