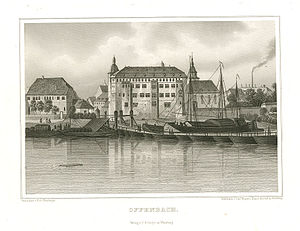 Isenburg Castle on a steel engraving from 1847

The south side to the Schlossplatz

North view from the Main side

The Isenburg Palace is a Renaissance -Schloss in Offenbach am Main . The medieval counts of Isenburg had it built in the 16th century. The Isenburg Palace is considered a remarkable renaissance object among art historians. This is clear from the differently designed facades on the north and south sides of the castle. The south side facing the city shows itself as a relaxed Renaissance facade with arcades between two stair towers, while the north side facing the Main shows a defensive facade made of parts of the older building fabric. The castle was originally planned as a four-wing castle. This construction project was never carried out.

As a precursor of Isenburg castle of 1394 to Werner von Falkenstein built Wasserburg apply. The Renaissance castle was completed in 1559, but burned down completely again in 1564. The castle galleries on the south side, which have been preserved to this day, are due to the following building. Historically significant congresses met several times in Isenburg Castle , including in 1741 on the reform of the imperial constitution. During the Thirty Years' War , King Gustav II Adolf of Sweden resided here to persuade the Frankfurt councilors to give up their city.

The Isenburg Palace was the residential palace of the Counts of Isenburg-Offenbach from 1628 to 1711 . After that it remained in the possession of the princes of Isenburg and Büdingen in Birstein . Prince Wolfgang Ernst II of Isenburg and Büdingen was known for having an open heart for religious enthusiasts . From 1787 he left the Isenburg Castle to the leader of Frankism Jakob Joseph Frank , who had tried to open the gates of the Eastern Jewish shtetl with his messianic work of redemption in Poland-Lithuania , but was repeatedly banned from traditional Judaism and baptized by the Roman Catholic Church , ennobled , but banned and persecuted for life because of non-Christian religious practices. The Prince of Isenburg gave a religiously persecuted person protection and at the same time himself what he dreamed of all his life. Frank resided in Isenburg Castle until his death in 1791 as a self-proclaimed Baron von Offenbach with around 400 followers in Offenbach who led the lives of emigrated Polish nobles to the outside world . After Frank's death, his daughter Eva Frank became the landlady of the Isenburg Palace; she died in 1816.

The landscape and history painter Leopold Bode had a studio in the castle until 1883, and the building also played an important role in the painter's work later on.

In 1900 the castle fell from private ownership to the Grand Duchy of Hesse-Darmstadt . At the end of the Second World War, the castle was badly damaged.

Under the direction of the architect Paul Friedrich Posenenske , the palace was rebuilt from 1952 to 1956 (begun by Erwin Schwarzer) and prepared for use as a state building authority. On the outside, numerous details have been extensively restored, but later decorative forms have been removed. Inside there was a modern contemporary equipment with high quality contract furniture. In 1977 the castle was painted an orange-red. The inside of the palace was renovated again around 2000, and the facade was renovated from 2007.

The Isenburg Palace is now part of the Offenbach University of Design campus . This is where the photography area and the computer work room are housed; at the beginning, Adam Jankowski's painting class was also in the building until the move to the larger rooms in the Geleitstrasse branch . The ground floor is used for events.