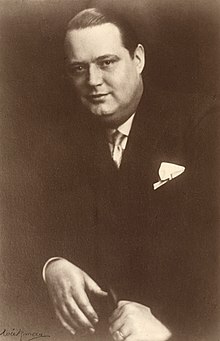 Ivar Frithiof Andrésen (born July 27, 1896 in Kristiana , † November 6, 1940 in Stockholm ) was a Norwegian opera singer ( bass ) who developed into one of the most important Wagner singers of his time since the mid-1920s . In Germany he was known for his engagements at the opera houses in Dresden and Berlin and for appearances at the Bayreuth Festival , where he also used the spelling Ivar Andrésen .

Ivar Andresen grew up in Oslo in the neighborhood of the later opera singer Kirsten Flagstad (1895–1962). He studied in Stockholm and later in the style education school of the Bayreuth Festival with Wagner's son Siegfried Wagner and in Berlin. He made his stage debut in 1919 as Pharaoh in Aida at the Stockholm Opera . He was engaged there from 1921 to 1925, before moving to Dresden from 1925 to 1931 and later to Berlin. He also sang from 1928 to 1931 at the Royal Opera House in Covent Garden ( London ) and at the English Glyndebourne Festival (1935, 1936). In 1930 he was the first Norwegian to sing at the Metropolitan Opera New York - as Daland in The Flying Dutchman . He made guest appearances in New York until 1932. In addition to the Wagner roles, he also played buffo parts, particularly in Mozart operas.

He married Greta in 1920 and had a son Toralf with her. Illness affected his career early on, and he died unexpectedly at age 44. Numerous recordings by Ivar Andresen have been preserved - also as a concert and lieder singer - which were later also re-released as CDs.

His brother was the baritone Henry Alf, his nephew the politician Thorvald Stoltenberg (* 1931).

In Norway he is also known for throat tablets of the brand IFA from the manufacturer Nidar : Their box adorns his portrait and his recommendation for singers, speakers, smokers and athletes dated Dresden, November 5, 1930 .