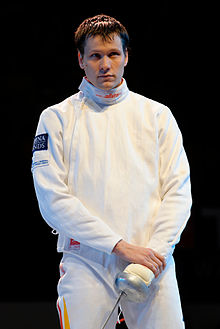 Jörg Fiedler at the 2013 World Cup in Paris

Jörg Fiedler (born February 21, 1978 in Leipzig ) is a former German fencer who belonged to the world class with his sword . He was a two-time German single champion .

At the 2004 Olympic Games in Athens, Sven Schmid , Daniel Strigel and Jörg Fiedler managed to win the bronze medal and thus the only medal win for German epee fencers since team gold in 1992. In 2005, the three fencers together with Martin Schmitt took second place at the world championships .

In 2010 he won bronze at the European Championships in Leipzig with the team made up of Christoph Kneip , Steffen Launer and Martin Schmitt . In 2011 Fiedler became European champion .

Since his first success in 2001, Fiedler has won several German championships, most recently in 2013 with the team.

After unsuccessfully qualifying for the 2016 Summer Olympics , Fiedler announced his retirement as an active fencer in May 2016. In the future he will work as a junior trainer at the federal junior training center in Leipzig.