Jack Mountain was first described by surveyor Henry Custer in 1859 and named after prospector Jack Rowley, who was active on Canyon Creek. The first documented ascent was made in 1904 by the topographer EC Barnard. By the 1980s, climbing routes were established on most of the ridges, glaciers, and guided tours, seven in all. Most are at Difficulty Level 4 ( YDS ) and some require real technical climbing. All of them are long routes with large differences in elevation, which means that most groups will take three to four days to climb.

The mountain consists mainly of metamorphic rock of the Hozameen group of volcanic or sedimented origin. Mostly green slate from the Jura to Permian dominates . Most of the surface material is badly eroded by water and glacial ice. The lower flanks of the mountain in Devils Creek Basin are comprised of Lower Cretaceous sedimentary rocks that are part of the Harts Pass Formation. The lower reaches of the mountain on the Ross Lake side are composed of many different types of rock including orthogneiss , ultramafic rock , low grade phyllite , tonalite , diorite and mica schist . 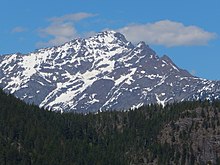 Jack Mountain from the west

The Jack Mountain area consists of a small and a few normal faults , none of which are showing seismic activity. Jack Mountain was formed when the Hozameen Group was pushed over the younger Harts Pass Formation to the east, most likely caused by the Ross Lake Fault to the west. The lower flanks of the mountain to the west were formed by the heterogeneous Plutonic Ruby Creek Belt.

The difficulty levels mentioned below are specified according to different systems.