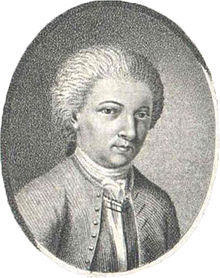 The son of a Huguenot nobleman spent his childhood and youth first in Jandun in Champagne and then from 1690 in Berlin. After King Louis XIV's repeal of the Edict of Nantes by the Edict of Fontainebleau in October 1685, French Protestants had lost their civil and religious rights. Duhan's father, a royal French councilor, had to leave France because of his Calvinist beliefs. He went to Berlin with his family, where he started a civil servant career.

Educator of Frederick the Great

After working as a teacher at the Collège Français of Huguenots in Berlin , Duhan became court master of Count Dohna and educator of one of his sons. In his service Duhan also took part in the siege of Stralsund in 1715 , where he attracted the attention of the Prussian King Friedrich Wilhelm I , who thereupon appointed him tutor of his then four-year-old son, Crown Prince Friedrich . In addition to the elementary teacher Hilmar Curas , who taught the Crown Prince to read and write, Duhan was initially only to teach arithmetic, geography and the history of the last hundred years; later, the king specified the prince's timetable in handwritten additions, in which he prescribed the teaching units and daily routine precisely, sometimes in minute intervals. The aim was to prepare for the conduct of state affairs, everything that was aesthetic and general was prohibited. The highly educated Duhan, however, sometimes overran these narrow limits and aroused enthusiasm for philosophical and literary works in his pupils, and did not completely renounce Latin. Without the king's knowledge, Duhan helped the crown prince obtain a library of around 4,000 volumes with mainly French authors. Duhan was responsible for his education until Friedrich's confirmation in 1727; Friedrich also remained closely connected to him. In 1727 Duhan was appointed judge councilor.

Exiled to Memel and Blankenburg

Friedrich Wilhelm made the three former prince tutors responsible for Friedrich's attempt to escape in 1730 and removed them from the vicinity of the Crown Prince. He banished Duhan to Memel , the most remote place in his state. In the summer of 1732 the king allowed the exile to accept a position as librarian with Duke Ludwig Rudolf von Braunschweig-Wolfenbüttel in Blankenburg, whereby Friedrich had to promise not to address Duhan at a possible meeting. Duhan also became a reader of Ludwig Rudolf's wife Christine Luise in Blankenburg and during her stays in Wolfenbüttel. According to the account books of the ducal chamber authorities, Duhan received an annual pardon from mercy of 400 thalers from October 1735 to April 1740.

Last years of life in Berlin

Three days after his accession to the throne in 1740, Friedrich, who was known that Duhan felt “extremely lonely”, brought him to Berlin with a heartfelt letter. He made Duhan a privy councilor in the Foreign Affairs Office with permission to evade official duties as he pleased. In January 1744 he became an honorary member of the Berlin Academy of Sciences . When Friedrich returned to Berlin on December 28, 1745 after the signing of the peace in Dresden , he interrupted his move in the solemnly illuminated city to visit Duhan at the death bed.

Friedrich's lifelong interest in French culture was significantly influenced by Duhan. How much Friedrich still valued his former teacher in adulthood is evident from the numerous downright heartfelt letters to Duhan; In a poem written in his honor, Friedrich even describes Duhan as his "true father".

Duhan wrote several articles on the history of Brandenburg and Prussia.
In 1791 Christian Friedrich Voss published in his publishing house in Berlin Friedrich's the Second, King of Prussia, correspondence before and after his accession to the throne with his court master Duhan de Jandun .

French representations of the 18th and 19th centuries