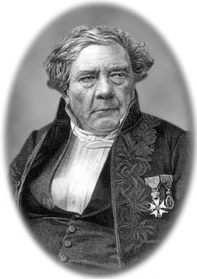 Babinet initially entered the French artillery as an officer , but left his military career in 1814 and became professor of mathematics in Fontenay-le-Comte , then professor of physics in Poitiers and finally at the Collège St. Louis in Paris.

In 1840 he was elected a member of the Académie des Sciences .

Babinet performed essential work on the diffraction of light, and the Babinet principle is named after him . He developed numerous optical instruments, but also other physical instruments ( hygrometer , air pump , protractor , Babinet compensator ) and examined the optical properties of minerals . He also studied meteorological phenomena such as the optical structure of the rainbow .