Errera at the Sixth Solvay Conference 1930 (standing, 6th from left)

Jacques Errera (born September 25, 1896 in Brussels , † March 30, 1977 ) was a Belgian physical chemist . He worked at the Free University of Brussels from 1926 as an associate professor and from 1930 as a full professor of chemistry and dealt in the context of his scientific work in particular with the molecular structure, infrared spectroscopy , with ultrasonic waves and colloid chemistry . For his research he received the Francqui Prize in 1938 . 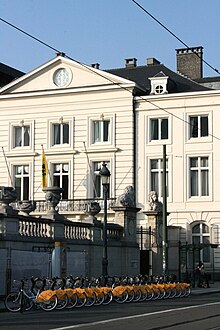 The Hôtel Errera in Brussels, Rue Royale 14, residence of Jacques Errera until his death in 1977, now the official residence of the Flemish government

Jacques Errera was born in 1896 to Paul Errera, professor of constitutional and administrative law and later rector at the Free University of Brussels, and his wife Isabelle Goldschmidt-Franchetti. The botanist Léo Errera was his uncle. The family's ancestors were Italian Sephardi from Venice . The father Léo and Paul Erreras, Jacques Errera, came to Brussels while working for Bank Oppenheim, where he married Marie Oppenheim in 1857 and settled permanently.

Errera received his PhD in chemistry from the Free University of Brussels in 1921 . In 1923, after studying at the universities in Paris and Leipzig, he acquired the title of Docteur spécial in physical chemistry . He then worked from 1924 as a lecturer at his alma mater, where he was appointed associate professor in 1926 and full professor in 1930, a position he held until his retirement in 1960. In addition, Errera was from 1934 to 1937 chairman of the jury of the Prix ​​Louis Empain in the field of "Physics and Chemistry" and taught as a visiting professor at the universities of Paris, Cambridge , Manchester and Aberdeen . The focus of his scientific work was in the areas of molecular structure, infrared spectroscopy , ultrasonic waves and colloid chemistry .

In both world wars, Errera served as a major in the Belgian army with responsibility for chemical weapons. During the Second World War he withdrew from German troops via southern France to Portugal, from where he followed his family, who had previously emigrated, to the United States in 1941. While he returned to Belgium with his wife and daughter at the end of the war, his son stayed in the United States and took American citizenship.

Errera was a member of the Conseil national de la politique scientifique from 1959 to 1968 , within which he served as chairman of the working group for nuclear sciences in 1963 and as a member of the technology commission in 1966. He also worked as the Permanent Representative of Belgium to the International Atomic Energy Agency (1958) and as Commissioner for Nuclear Energy (1959–1970).

Errera has received several awards for his services. He was awarded the Prix ​​Jean Stas in 1921 , the Prix ​​A. De Potter in 1923 , and in 1960 the Prix ​​Emile Bernheim together with the co-authors of the work “ Euratom: Analyze et commentaires du traité ” . In 1938 Errera received the prestigious Francqui Prize . The four-member jury, which included chairman Nevil Vincent Sidgwick as well as Peter Debye , Charles Manneback and Léon Rosenfeld , recognized his work in the field of the molecular composition of matter and his excellent research results, with which he had acquired international authority, which in made a particular contribution to increasing Belgium's reputation in the scientific world. As a result, Errera was awarded the Leopold Order.

Errera was married to Jacqueline Baumann, daughter of a wealthy entrepreneur. They had a daughter and a son, Paul Errera, professor of psychology at Yale University .