This article is about the songwriter. For the author of the same name, see Joe Hill (writer) 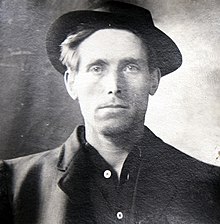 Joe Hill (born October 7, 1879 in Gävle , Sweden as Joel Emmanuel Hägglund ; † November 19, 1915 in Salt Lake City ), also known under the name Joseph Hillström, was an American migrant worker ( hobo ), labor leader , union activist , Singer and songwriter . He played the banjo, guitar, piano and accordion. Numerous popular English-language folk songs originate from his pen , and have been published in the IWW's Little Red Songbook . His lyrics are characterized by humor and irony.

He was sentenced to death for murder in a controversial trial; after his execution he became a legend and in turn the subject of numerous songs.

Joel Hägglund grew up in the old town of the northern Swedish port city of Gävle . His parents' house at 28 Nedre Bergsgatan is now a Joe Hill Museum. He worked in a baptism factory, which probably gave him some form of skin tuberculosis that was severely impaired and required lengthy treatment. After his father, the railway worker Olof Hägglund, died on December 7, 1887 as a result of an accident at work, the family of six lived in great poverty. After the death of his mother Catharina on January 17, 1902, Joel and his brother Paul emigrated to the United States via Gothenburg and Liverpool in October of the same year. During the crossing of the Atlantic Ocean with the Saxonia of the Cunard Line , he gave himself the name Joe Hill to start a new life in the new world .

After doing low work in bars in New York, he moved steadily westward. In Chicago he worked in a machine factory and hired himself as a harvest worker. He experienced the 1906 San Francisco earthquake , about which he published a report in a Swedish daily newspaper. His exact date of joining the radical Industrial Workers of the World union is unclear; He was first mentioned as a member of the IWW local branch Portland (Local 92) as the author of an article in the then weekly newspaper Industrial Worker in 1910.

In 1910 he traveled to Fresno , California, where the IWW led a bitter struggle for freedom of speech and assembly (free speech fight); In 1911 Hill took part in the Mexican Revolution in Baja with a small guerrilla force that Ricardo Flores Magón had put together in Los Angeles . At the Southern Pacific Society , he helped organize his first strike , and discovered his talent for speaking and the ability to put rebellious words into melodies. In 1912 he appeared in British Columbia , where he wrote songs for the striking railroad workers of the Canadian Northern Railway .

Eventually Joe Hill came to Bingham in the Mormon state of Utah . Here he organized the workers of the Utah Construction Company into a larger union that could fight for a new pay scale, shorter working hours and better food.

Through unfortunate circumstances and, as it turned out, also through sloppy preliminary investigations, Joe Hill was charged with the murder of grocer John Morisson and his son Arling on January 10, 1914 in Salt Lake City and convicted despite insufficient evidence.

The case turned into one of the biggest judicial scandals in the United States. While important evidence was withheld in court, the letter read from a California police chief who once illegally arrested Hill for attempting to recruit dock workers for the IWW:

“I learned that you had arrested a Joseph Hillstrom for murder. You have the right man. He is certainly an undesirable citizen. He's something of a musician and a songwriter for the IWW songbook. "

Both the Swedish consul and US President Woodrow Wilson tried to initiate a retrial. The IWW started a vehement campaign. But the Utah Supreme Court upheld the guilty verdict. During this time, Joe Hill was composing poetry in prison and his songs became known nationwide. Friends advised Hill to file a pardon, which there is a high probability that it would have been granted. Hill's answer to this: “I don't want grace, I want justice. And if I don't get this, I'd rather go under than ask for mercy. "

The day before his execution, Joe Hill wrote his will:

My body? Oh, if I could choose
I would to ashes it reduce
And let the merry breezes blow
My dust to where some flowers grow
Perhaps some fading flower then
Would come to life and bloom again.

This is my last and final will.
Good Luck to All of You - Joe Hill

Augustin Souchy translated it into German:

My will is to be humble and humble,
for nothing on earth, friends, is mine.
In vain, dear ones, is all your lamentations,
trees in hail, how could they bear fruit?

My body I can confess my wish to you!
Let the Asch, the rotten, burn!
Let storms and winds blow through countries,
let them find rest on flowery lawns!
Perhaps the dying flower
will one day, still bloom at some point, the blossom to glory.

Finally: good luck! To him who will;
It's my last will - your Joe Hill.

A more literal translation is the following:

My will? Easy to write!
Because I don't have anything to leave behind.
The friends shouldn't cry for me -
"Moss doesn't get on rolling stones".

My corpse? I could name a wish:
It should be burned to ashes.
And let the serene winds blow
the dust where flowers stand.
Perhaps such a poor green can
then live on, bloom again.

That's it. This is my last will.
Good luck to you all - Joe Hill.

His last words, before he was fatally hit by several rifle shots on the wall in the prison yard of Salt Lake City on November 19, 1915, were: “ Don't mourn, organize!”. According to legend, he himself should have given the command to fire.

Joe Hill's body was sent to Chicago, where - according to his last will - it was cremated. Some of the ashes were distributed in letters from IWW headquarters and sent to all IWW local groups. Large funeral demonstrations took place in Chicago and many other places. In 1988 one of these envelopes emerged, which had been confiscated by the US Post in 1917 because of its " subversive potential". In addition to the said ashes, it contained a photo of Hills with the inscription: "Joe Hill murdered by the capitalist class, Nov. 19, 1915." The letter is now in the US National Archives.

Also in 1988, the remainder of Joe Hill's ashes were turned over to the IWW. Some have been scattered to the winds in the United States, Canada, Sweden, Australia, and Nicaragua. Carlos Cortez , also a well-known wobbly , scattered another piece at a memorial ceremony in 1989 when a memorial was unveiled to six striking IWW miners who were machine-shot dead by state police in Lafayette, Colorado . The men were unarmed at the time of their death, and their graves had remained anonymous to date. Most of the ashes were buried in the wall of a union building in Landskrona , southern Sweden. A plaque reminds of Hill there. 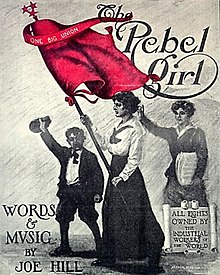 Perhaps Joe Hill's most popular poem was titled "The Preacher and the Slave". It is a parody of the then famous hymn "In The Sweet by and by" and makes fun of religious benefactors and false prophets:

Long-haired preachers come out every night,
try to tell you what's wrong and what's right;
But when asked about something to eat,
They will answer in voices so sweet:
You will eat, bye and bye,
In that glorious land in the sky;
Work and pray, live on hay
You'll get pie in the sky when you die.

(Literally: long-haired preachers come out every night / trying to tell you what is wrong and what is right; / but when asked for something to eat, / they answer in a sugar-sweet voice: / soon you will be eating / in the splendid Heaven; / Work and pray, live on hay, / You will get cake in Heaven when you die.)

In 1925 Alfred Hayes composed a socially critical ballad entitled I Dreamed I Saw Joe Hill Last Night , which later became known under the title Joe Hill . Hayes' lines were set to music by Earl Robinson in 1936 . In German-speaking countries, the song about Joe Hill became known mainly through Pete Seeger and Joan Baez , who performed the song at the Woodstock Festival , but also through the interpretation by Paul Robeson . The Irish Dubliners also recorded a version. In the song, Joe Hill, who has died ten years ago and is still alive, appears wherever workers organize and defend their rights. In the Baez version it reads as follows:

1. I dreamed I saw Joe Hill last night, alive as you and me.

3. And standing there as big as life and smiling with his eyes

4. From San Diego up to Maine in every mine and mill,

5. I dreamed I saw Joe Hill last night, alive as you and me.

The song is known worldwide as a union anthem as well as Sixteen Tons . It finally made Joe Hill an icon of the American trade union movement. The lyrics by Alfred Hayes were also included by the English band Chumbawamba in their song By and By, which is dedicated to Joe Hill:

The singer and songwriter Phil Ochs composed another song entitled Joe Hill, which belongs to the repertoire of the Briton Billy Bragg .