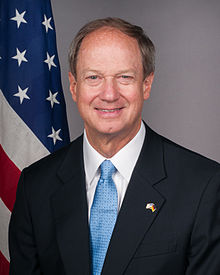 John Bonnell Emerson (born January 11, 1954 in Chicago , Illinois ) is an American business lawyer and was the United States Ambassador to Germany from August 2013 to January 20, 2017 .

John B. Emerson 2013 in Berlin, laying a stumbling block for the resistance fighters against National Socialism Arvid and Mildred Harnack

Both of John B. Emerson's parents have German roots. At the age of twelve, Emerson began to learn German (also to be able to understand conversations in German between his father and his mother of German descent).

At Hamilton College Emerson received the Bachelor of Arts in Philosophy and the University of Chicago he received his Juris Doctor .

He then worked in the legal department of the City of Los Angeles and from 1978 was a partner in the law firm Manatt, Phelps, Rothenberg, and Phillips .

In 1993 he was appointed to the Executive Office by President Bill Clinton and served as Deputy Assistant until 1997 . In this role he coordinated business conferences and organized the approval of the General Agreement on Tariffs and Trade of the Uruguay Round as well as the extension of the status of the People's Republic of China according to the most-favored nation principle . During his time as a consultant to Bill Clinton, he spent a few months in Germany at the invitation of the Friedrich Ebert Foundation .

Emerson was the chairman of the Los Angeles Music Center and a board member for the YMCAs in the greater Los Angeles area. As President , he was responsible for the retail banking business of the Capital Group Companies and led the Capital Guardian Trust Company. He advised the mayor of Los Angeles on trade issues and is a member of the Council on Foreign Relations .

In 2010, President Barack Obama named him a member of his trade policy advisory board. Before Obama's re-election as president, he was the US Democrats' chief financial officer .

Since August 2013 Emerson lived with his family in Berlin . On August 26, 2013, he was accredited as the United States Ambassador to Germany and successor to Philip D. Murphy . Emerson took office as ambassador at a time when relations between Germany and the United States were tense due to the surveillance and espionage affair. For example, on August 28, 2013 , the Federal Chancellery and the Federal Ministry of the Interior had a Federal Police helicopter fly at low altitude over the grounds of the US Consulate General in Frankfurt in order to collect photographic evidence for the suspicion that there was an American eavesdropping station there. Emerson then submitted a protest note to the Foreign Office .

Emerson urged the decision of all NATO members to increase their defense spending.

On January 20, 2017, the new US President Donald Trump dismissed him and all other US ambassadors appointed by his predecessor Barack Obama.

Emerson has been chairman of the American Council on Germany since January 2018 .

Emerson is married to Kimberly Marteau Emerson and has three daughters. His eldest daughter, Jacqueline Emerson, is an actress.