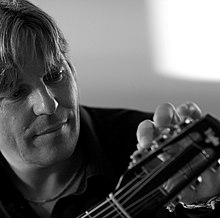 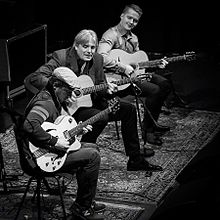 Larsen mainly plays gypsy swing or gypsy jazz in the jazz quartet Hot Club de Norvège , which he founded in 1979 , with which he recorded 25 CDs until 2009 and continues to tour around the world regularly. He founded the Django Festival in 1980 and started numerous crossover projects of gypsy jazz with classical ensembles, for example in the Symphonic Django concert tours with Stochelo Rosenberg, among others .

Larsen's formative influences are, in his own words, Frank Zappa , Astor Piazzolla and Gypsy-Swing à la Django Reinhardt and Boulou Ferré as well as surrealist painting, especially by Salvador Dalí , which he studied during a one-year stay in Barcelona in 1978 . From 1976 to 1995 he had annual exhibitions as a painter in Oslo, but then concentrated on composing. In 2009 a book ( Maler i solnedgang ) was published about him as a painter, and he also has his own art book publisher (Die goldene Banane).

He produced over 350 jazz records for Hot Club Records (founded by him in 1982), among others by Chet Baker , Philip Catherine , Stéphane Grappelli , Warne Marsh and gypsy musicians such as Biréli Lagrène , Stochelo Rosenberg.

In the 2000s he was also involved in various Zappa projects, such as the Strange News from Mars project and as a producer for the Zonic Entertainment label he founded in 2007 , which is dedicated to the music of Zappa and his epigones.

In 2007, Larsen was awarded the Buddy Prize, Norway's most important jazz prize. The following year he received the Oslo City Artist Prize.

Larsen has also been working as a hobby astro-geologist since 2009 and, after several years of basic research, was able to prove that, contrary to the prevailing opinion until then, it is possible to find micrometeorites even in the middle of inhabited areas .