Monument to von Gravenreuth in Duala 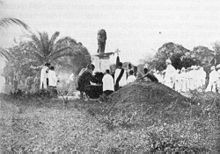 He came from the originally Franconian noble family von Gravenreuth and joined the 3rd Infantry Regiment of the Bavarian Army as a volunteer in 1877 . In 1879 he was second lieutenant and in 1885 he was given leave of absence from the German-East African Society (DOAG).

As one of the first colonial pioneers in German East Africa , Gravenreuth acted as deputy Reich Commissioner and from 1889 as chief (company commander) in the "Wissmann troop" named after Hermann von Wissmann . In this function he was instrumental in the suppression of the coastal uprising against the rule of the DOAG (so-called " Arab uprising "). On May 8, 1889, he was involved in the storming of Buschiri's camp. On November 18, 1889, he defeated the Mafiti who were pushing towards the coast near Yombe while Wissmann marched on Mpapua. On January 28, 1890, Gravenreuth defeated the Arab leader Bana Heri near Mandera and led on 8/9. March the decisive blow against Bana Heri's camp in Palamakaa. In January 1889 he was promoted to prime lieutenant and placed à la suite of his regiment. In 1890 he returned to Europe for health reasons and was temporarily employed in the Foreign Office .

In 1891 Gravenreuth was ordered as a captain to set up a paramilitary mercenary force and carry out an expedition to the north of the German protected area in Cameroon . Without consulting the colonial administration, he mainly composed his teams of non-freemen who he “bought” in Dahome in order to settle them as a workers' colony in Cameroon after paying their “purchase price”. His unauthorized approach earned him sharp criticism from the government and the colonial department. In order to avoid a public scandal, however, the measure was covered.

With the Dahome mercenary troops and parts of an existing police unit, Gravenreuth undertook an expedition against the Bankon on the Abo River in October 1891 and against the Kpe ( Bakwiri ) on the Cameroon Mountain in November of the same year . One of his companions was Max von Stetten , who later became the leader of the German police and protection forces in Cameroon. During the fighting in front of Buea, Gravenreuth was fatally injured by a poisoned spear. His body was later transferred to Douala and buried there on June 15, 1895 on the Joßplatte. He was succeeded by Hans von Ramsay in 1892 .

Streets in Munich , Fürstenfeldbruck , Cologne , Feldkirchen (Lower Bavaria) and Affing were named after him. In Munich there has been a controversial discussion about changing street names with colonial references for years. This also applies to Von-Gravenreuth-Straße.