from Wikipedia, the free encyclopedia
This is the spotted version , flagged on July 20, 2020 . There is 1 pending change that has yet to be viewed. 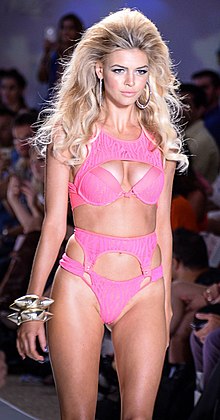 Kelly Rohrbach was in Greenwich in the US state of Connecticut born to Anne Wholey Rohrbach Rohrbach and Clay. In her youth she attended Greenwich Academy , a private girls' school in her hometown. There she played golf professionally for school and received an athletic scholarship to Georgetown University for her achievements . In Georgetown , she studied theater and then moved on to London London Academy of Music and Dramatic Art , in order to continue their studies.

Early in her acting career, Rohrbach had several small roles in television series such as Two and a Half Men and Rizzoli & Isles . However, after working as an actress for two years, she started modeling and was signed to the IMG Models agency . Beginning in 2016, it was announced that they alongside Dwayne Johnson and Zac Efron , the role of CJ Parker in the remake Baywatch will take over (2017). In the television series of the same name , on which the film is based, the role of Pamela Anderson was played.

Rohrbach was in a relationship with fellow actor Leonardo DiCaprio from April to November 2015 .