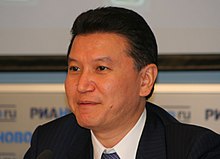 Kirsan Nikolajewitsch Iljumschinow ( Russian Кирсан Николаевич Илюмжинов , Kalmyk Үлмҗин Кирсан Ülmdschin Kirsan ; born April 5, 1962 in Elista ) was head of the Russian Republic of Kalmykia from 1993 to 2010 . In addition, he was president of the world chess federation FIDE from 1995 to 2018 . Because of sanctions imposed by the US Treasury Department against him, Ilyumschinov left the administration of office to the vice-president of the association Georgios Makropoulos on December 6, 2015 until the sanctions were lifted . He is the owner of the weekly newspaper Nowy Wsgljad (Cyrillic Новый Взгляд ; about New View ).

In his youth he achieved success in chess, which he learned at the age of four, and in boxing. After graduating from school, he worked in a factory for two years. Ilyumschinov did two years of military service in the Soviet Army and was dismissed as senior sergeant . Then from 1983 to 1989 he studied at the Institute for Foreign Policy in Moscow, through which he established good connections with members of the nomenklatura . He then worked as a manager for a Soviet-Japanese trading company in the automotive sector and made a considerable fortune.

Ilyumschinov won the first election in Kalmykia in 1993 after the collapse of the Soviet Union with 65% of the vote. In the early presidential elections in 1995, he received 85%, which surprised many observers as his policy was considered controversial.

In 1998 Ilyumschinov was suspected by the opposition party Yabloko , among others, of being involved in the murder of the journalist Larisa Yudina , who was critical of the government , who wanted to publish an article on the evening of the 1998 Kalmykia Chess Olympiad about offshoring of foreign companies in Kalmykia, which she regarded as illegal was killed in front of her home. Two perpetrators were later convicted on the basis of their own confessions, including Ilyumschinov's advisor Sergei V. However, no evidence of an assignment by Ilyumschinov was discovered.

In 2002 he was confirmed in office. In early October 2005 he offered to resign, but was nominated by Russian President Vladimir Putin for a further four-year term. On October 24, 2010, Ilyumschinov's presidency ran out, with Ilyumschinov no longer wanting to run. In September 2010 he announced that he would continue to campaign for Kalmykia even without political office. His successor as President of Kalmykia has been Alexei Orlov since autumn 2010 .

On November 25, 2015, the United States Treasury Department imposed sanctions on four people and six companies, including Ilyumschinov and the Russian Financial Alliance, which he heads for supporting the Syrian government under Bashar al-Assad . 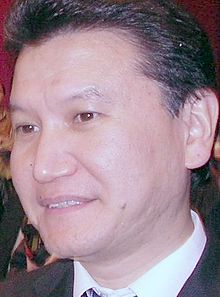 Kirsan Ilyumschinow at the 2008 Chess Olympiad in Dresden

Ilyumschinow was President of the World Chess Federation FIDE from 1995 to 2018 , but was suspended from July 2018 to the end of October 2018. He financed numerous chess events from his own resources. For the 1998 Chess Olympiad in Elista he had a “ chess town ” built especially for him . On June 2, 2006, he was re-elected for a further four-year term as FIDE President, his opponent in this election was Bessel Kok . During his tenure, Ilyumschinow reached the reunification battle between Vladimir Kramnik and Wesselin Topalow and ended the splitting of the world championship between FIDE and PCA / WCC / Braingames in 2006 , which had been ongoing since 1993. In September 2010 he was elected for another term of office. He won the vote against his opponent Anatoly Karpov with 3 abstentions with 95 to 55 votes. In August 2014 Ilyumschinov was re-elected. He won with 110 to 61 delegate votes against his challenger, the former world chess champion Garry Kasparov . On charges against him accusations of corruption said Ilyumzhinov, he had earned any money during his presidency, but more than 80 million dollars spent his private fortune to promote chess.

In September 2010, he offered $ 10 million for a piece of land near Ground Zero in New York City to build a chess center.

Ilyumschinow sees himself as a promoter of religion and in his predominantly Buddhist country has not only supported the Russian Orthodox Church (about a third of the population), but also the construction of a synagogue , a mosque and a Catholic church . In memory of the victims of the deportation of the Kalmyks during the Second World War , he opened the newly built Golden Temple in Elista on December 27, 2005 . Both the temple and the Buddha statue inside are now considered to be the largest of their kind in Europe.

In April 2010, Kirsan Ilyumschinov claimed in a TV interview that he was kidnapped by extraterrestrial beings in 1997 .

In June 2011 he showed himself during the civil war in Libya at a game of chess with the Libyan dictator Muammar al-Gaddafi .

Presidents of the Republic of Kalmykia ( Russian Federation )