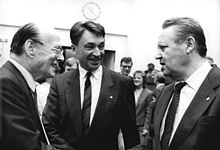 Klaus Thielmann (born October 29, 1933 in Pulsnitz ) is a former German politician ( SED ) of Sorbian origin. From January 1989 to April 1990 he was Minister for Health and Social Affairs in the GDR .

Thielmann grew up as the son of a family of doctors in Quoos , passed his Abitur at the Sorbian High School in Bautzen and studied medicine from 1952 to 1957 at the Karl Marx University in Leipzig and the Medical Academy in Erfurt . In 1957 he was promoted to Dr. med. doctorate, was an assistant doctor at the Stralsund district hospital for one year and from 1958 to 1959 ship doctor at the German shipping company (DSR). From 1959 to 1963 Thielmann worked as a scientific assistant at the institutes for Physiological Chemistry at the Universities of Greifswald and Jena .

He was appointed senior physician at the Friedrich Schiller University in Jena in 1963 and, after completing his habilitation in 1965, became a university lecturer. From 1968 to 1971 Thielmann was visiting professor at the Centro Nacional de Investigaciones Científicas (CNIC) in Havana ( Cuba ). In 1974 he was appointed full professor at the Medical Academy in Erfurt, where he was Vice-Rector for Scientific and Medical Research from 1976 to 1982 . Thielmann joined the Socialist Unity Party of Germany in 1978. In 1982 he was appointed Deputy Minister for Higher and Technical Education, and in January 1989 as Minister for Health. Thielmann was the only Sorbe who ever held a ministerial post in the GDR.

Since November 20, 1989 he was a member of the Modrow government in the same capacity . His ministerial office ended in April 1990 due to the free elections held for the first time in the GDR by appointing a successor. After that he was full professor at the Institute for Pathology of the Medical Faculty ( Charité ) of the Humboldt University in Berlin until October 1991 . From 1992 to 1994 Thielmann worked on behalf of the European Bank for Reconstruction and Development (EBRD, London) as a management consultant at the International Finance and Banking School in Moscow , and from 1994 to 1997 in the same mission at the Regional Bank Training Center for the Central Asian Uzbekistan region , Kyrgyzstan and Tajikistan in Tashkent . From 1998 to 2001 Thielmann headed an EU project in Moscow to support the management and management of the Russian health care system (EU / TACIS : 'Support to Health Care Management in the Russian Federation'). From 2001 to 2004 Thielmann was involved in the implementation of several international projects to reform the Russian healthcare system. At the same time and afterwards, Thielmann devoted himself to his extensive publication and lecturing activities.

Minister of Health of the German Democratic Republic