The Augustinian Hermit Convent of St. Katharina , in Czech Klášter sv. Kateřiny , is a former monastery in Prague , Czech Republic . It was donated in 1355 and abolished in 1783. 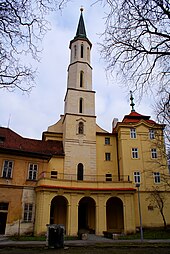 The tower of the Katharinenkirche

In gratitude for his first victory , on November 25, 1332, the feast day of Saint Catherine of Alexandria , at the castle of San Felice sul Panaro in Italy, Emperor Charles IV donated a monastery to the mendicant order of the Augustinian Hermits in 1355 the newly created New Town of Prague .

The monastery church was consecrated on November 29, 1367. Its slender Gothic tower is the only remaining part of this church since 1420. On May 25, 1420 a group of Taborites , a radical and particularly militant wing of the Hussites , attacked the monastery, drove out the Augustinians and destroyed the church and the enclosure. When trying to tear down the high tower, some of the attackers were killed by falling wall loads, and the 51.3 m high tower, the upper floors of which have the shape of an octagon , was preserved. It is sometimes jokingly referred to as the “Prague minaret ”.

It was only around 100 years after the attack by the Hussites, between 1518 and 1522, that the church and the convent buildings were rebuilt.

In 1565 Augustinian monks took over the monastery and church and replaced the Augustinian women.

From 1718 to 1730 the former Gothic monastery buildings were rebuilt in the Baroque style according to plans by Franz Maximilian Kaňka . Thereafter, in the years 1737 to 1741, the Katharinenkirche was rebuilt according to plans by Kaňka and Kilian Ignaz Dientzenhofer ; It was decorated with frescoes by Wenzel Lorenz Reiner from the lives of the titular saints, which have been excellently preserved. The group tombstones of the children of Jan I von Lobkowicz as well as the tombstones of Theobald František von Dewaldt and - most likely - Zikmund Fellner von Feldegg are also worth seeing .

In the course of the Josephine reforms , the monastery was closed and used as a military training institution from 1787 . From 1822 it housed an asylum , from 1837 to 1851 under the direction of the psychiatrist Josef Gottfried von Riedel . After the end of the Second World War in May 1945, the neurological clinic of the 1st Medical Faculty of the Charles University used the building, which was restored again during this time.

After 1950 the church served the National Museum (Prague) as a depot and lapidarium , in which mighty stone figures of Charles Bridge , originals and casts were kept, including the equestrian statue of St. Wenceslas by Johann Georg Bendl , which stood on Wenceslas Square until 1913 .

In the present at the beginning of the 21st century, the monastery church is being renovated and is available to the Lords of the Cross with the Red Star .