Konrad I von Steinach had close ties to Count Palatine Gottfried von Calw from an early age and through him came to the court of Emperor Heinrich V. Also the court and imperial politics of King Konrad III. and from Emperor Friedrich Barbarossa the Steinacher remained connected. The former appointed him Bishop of Worms in February 1150. He took part in various court days of both rulers and served in the army on Barbarossa's first and second train to Italy. The emperor also came to see him in Worms more often. 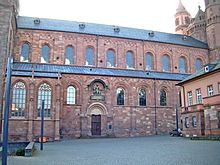 Worms Cathedral, nave from the north

Konrad von Steinach promoted the Schönau monastery founded by his predecessor and gave him other goods. Already in the deed of foundation of 1142 he appeared with his brother as a witness.

He died in 1171 and was buried in Worms Cathedral. Frequently rumored reports of his death in the Orient and his burial in Tire are apparently based on a mix-up. Friedrich Zorn handed down the grave inscription in the Worms Chronicle .