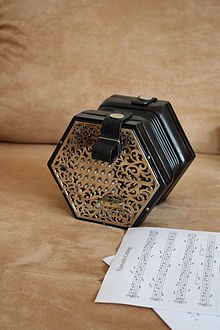 A concertina (also concertina ) is a single-tone or alternating- tone hand-drawn instrument with a four-, six- or octagonal case. In contrast to the accordion , a concertina has no built-in chords, but rather single notes throughout.

In 1844 Charles Wheatstone patented his monotonous English concertina, after he had already been granted a patent on June 19, 1829 for the precursor of the concertina, the symphonium . The English concertina was characterized by a continuous chromatic sequence of notes distributed on the left and right side . Due to the layout of the keys, it was particularly suitable as a melody instrument, mostly with piano accompaniment. The chromatic key arrangement and the arrangement of the reed plates were the real innovation. Charles Wheatstone was particularly interested in scientific literature in French, so the scientific publications of the time were known or accessible to him through studies with resilient tongues . His uncle's music shop in London offered all kinds of musical instruments, including those made in Germany, France and Austria. During his apprenticeship with his uncle, he had the opportunity to research modern punched tongue instruments. But he broke off his apprenticeship prematurely because, according to his uncle, he lacked the necessary manual skills. After the early death of his uncle, he and his brother took over his music business as well as his father's business. Later Charles Wheatstone had a sheng sent from St. Petersburg. In later years he also improved Wolfgang von Kempelen's language machine .

In contrast to Carl Friederich Uhlig from Chemnitz or other contemporary instrument makers in Vienna or Paris, Wheatstone's interest in the concertina was primarily because it offered the technical opportunity to study acoustic phenomena. Shortly beforehand, he had published a paper that dealt with the laws of music theory.

Charles Wheatstone had his brother to thank for the fact that his ideas were ultimately marketed. Further technical development did not only depend on Charles Wheatstone. The necessary specialists for production were brought in very early on. The Swiss watchmaker Louis Lachenal and John Crabb were hired. Lachenal was responsible for the technical execution and Crabb for the design.

Charles Wheatstone dealt with calculations and experiments that were directly related to the concertina. So he looked for alloys for reeds that promised better results. He wanted reeds that kept the pitch exactly. In the symphonium, the reeds were first made of silver and later made of gold, but the common steel was ultimately used for the English concertina.

The English concertina was primarily an instrument for the sophisticated audience. Nevertheless, it experienced a boom in England very early on. As early as 1850, there were 100 manufacturing facilities for the English concertina. The manufactured concertinas were partly luxuriously furnished and decorated with gold or silver buttons, for example.

One of the leading virtuosos of the Wheatstone type of concertina was Giulio Regondi , who was also the leading guitarist of his time. Regondi gave concerts at the Konzertina as part of his concert tour in Vienna in 1840/41. Presumably he made contact with Johann Dubez (also: Dubetz) there, who also performed at the Wheatstone concertina. Regondi and also the contemporary sources on Johann Dubez mostly speak of the melophon , which was used synonymously with the term concertina, but is an instrument of a different design. Dubez concert tours (including to the Balkans and Constantinople) and his work in Vienna brought the concertina attention outside of England until the end of the 1880s. In the English folk scene today, Rob Harbron is one of the masters of the English concertina.

We owe a particularly detailed description to a book that Hector Berlioz wrote in 1839 ( Grande Traité d'instrumentation et d'orchestration modern (1844), German translation: Peters 1905). This manual was translated into German by Erich Doflein and later revised by Richard Strauss . He writes:

“This is a small instrument with metal plates that are made to vibrate by the air flow. The concertina emerged from the accordion, which served as a musical toy for a few years […] The concertina is a kind of elastic little box that you hold horizontally between both hands; They are played by means of buttons that are pressed with the fingertips and which open a flap that lets air that is supplied through a bellows between the two side walls of the box brush onto metal leaves or tongues; [...] there is a bass, alto and soprano concertina. [...] The soprano concertina is almost the only one that is in use. […] In their two chromatic scales [left and right] […] one notices that the maker […] has set up enharmonic intervals between A-flat and G sharp and between E flat and D flat in the first three octaves by setting up gives the A-flat and the E-flat a slightly higher sound than the G sharp and the D flat, according to the teaching of the acousticians [Charles Wheatstone wrote a paper on this], which is completely contrary to musical practice. This is a strange anomaly. It is clear that the concertina is an instrument with fixed tones like the pianoforte, the organ […]. They should also be tuned according to the temperature law. In her current state, however, the enharmonic tones do not allow her to play together with the instruments just mentioned without producing dissonances, [...] because on instruments with tempered tuning, A-flat and G-sharp are both E-flat and D-flat, while on the concertina they are identical Not. [...] "
(Hector Berlioz is now expanding this topic in detail. You can read about it in the original over 3 pages.)
“After this long digression, I am now returning to the English concertina, the barbaric scale of which is shown in example 5). Regardless of the arrangement in this example, the concertina is written on a single line and in the treble clef. The trill can be performed on all levels of the scale, but it is more difficult in the depth. The double trill (in thirds) is easy. This instrument allows diatonic, chromatic, or arpeggiated passages to be performed at considerable speed. It is possible to add to the main part, if not several other complicated parts, as in the pianoforte and the organ, at least a second part, which goes roughly parallel to the melody, and chords of four to six or more notes . "
“The German concertina, which is also very popular in England, is not built according to the system of the previous one. Your scale, which goes even further down to C and Bb, does not contain any one-harmonic intervals; it is therefore built according to the temperature law. The size of the concertina depends on the number of keys, buttons or keys that are given to it, and this number changes according to the mood of the manufacturer. "

As can be seen from the text above, the tuning was originally mid-tone . Today most concertinas have been converted to equal tuning . The pitch of the reference tone is often not the 440 Hz customary today. The concertinas used by the Salvation Army were mostly tuned a lot higher.

English system concertinas were tuned with perfect fifths and thirds. In the case of equal tuning , some tones are then available twice (D flat / E flat and G sharp / A flat). But the traditional mean-tone tuning was with perfect fifths and thirds, this meant that these tones differed slightly in pitch. With the tones D-flat and E-flat, the differences accumulate to 21.5 cents (see syntonic comma ).

It is essential that not all chords sound equally good in this tuning practice.

In 1848 Frédéric Chopin got to know the instrument on a trip to Scotland. He didn't find the sound or the way of playing particularly positive: “It seems as if each of these creatures (Scottish ladies who played the concertina) were unscrewed. What a strange lot! God keep her! "

Concertinas have long been made in the traditional way by the Lachenal and Wheatstone companies . Many historical instruments are still in good condition and are traded at relatively high prices. Unlike the cheaper types of accordions in the rest of Europe, the instruments are well documented. Usually there is also a note about the exact production date in the original production records available online. There are several museums that are specifically dedicated to the concertina. Hardly any other instrument is so well documented and traceable.

Today there are still some traditional concertina makers, for example in England (Colin Dipper), Germany (Jürgen Suttner) and in the USA (Wim Wakker).

Concertinas are also being built in the USA today, but mostly with standard accordion voice plates from Italy. There are also cheap replicas from China and Italy on the market. However, since the construction differs significantly from the traditional design, they are hardly comparable in terms of sound. Today reed blocks are installed similar to the accordion.

The Chemnitz clarinetist and instrument maker Carl Friedrich Uhlig (1789–1874) made the acquaintance of an accordion made by Cyrill Demian on a trip to Vienna , changed it, but kept to the diatonic and alternating key assignment. Demian had already anticipated that his instrument could also consist of two mirrored boxes, which leads to the doubling of the tones. It is not clear whether such instruments were also sold in Vienna at that time.

In 1834 Carl Friedrich Uhlig constructed a small concertina with alternating tones , practically without knowing about the English concertina, as it had not yet been produced , which was finally expanded to 64 keys (128 tones) in 1924. He had good business success with this instrument, in 1854 he exhibited at the industrial exhibition in Munich and received an honorary coin.

On both sides there are only single tones and no chord or bass mechanics like those offered by the accordion . These instruments are similar in size to the bandoneon and usually have a square case. In addition to this Chemnitz concertina there is the Carlsfeld concertina , which mainly differs in the arrangement of the tones.

The original rather small instrument with a rectangular case (later with a hexagonal case), the German Concertina , also survived in parallel and, like the English Concertina, is now widely used, especially in the folk scene of the British Isles . Like the bandoneon or the Styrian harmonica , it also has alternating tones, i.e. H. a different tone sounds when you pull a button than when you push it.

Another well-known further development of the German Concertina is the bandoneon , which has become particularly popular in South America and experienced a revival in Europe in the 1950s with the popularity of tango music, the most popular of which was and is probably Astor Piazzolla .

All of the concertina types mentioned here were built in hundreds of variants, since at the end of the 19th century instrument making was not as standardized and much more experimental than it is today.

Use in southern Africa

The concertina is the predominant solo instrument in the Boeremusiek , which is cultivated by the Boers in South Africa and Namibia . In 1902 alone 97,315 concertinas were imported into the region from Germany. The Famo -music that has its roots in the townships , the blacks, originally used the concertina as a solo instrument.