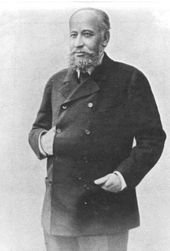 Brodskyj was born as the son of the Jew Israel Brodskyj, the founder of a sugar factory, in the Shtetl Slatopil in the governorate of Kiev. Lasar Brodskyj later, along with his father and brother, was very successful in the sugar business and made a huge fortune. In addition, he expanded his entrepreneurial activity to numerous other industries.

Numerous buildings in Kiev owe their existence to his philanthropic activities , including the Bessarabska market hall , the Kiev Polytechnic Institute and the largest of the Kiev synagogues, the Brodsky Synagogue, which was later named after him .

Brodskyj received a number of awards, for example, following the Paris World Exhibition in 1900, he was accepted into the Legion of Honor and was awarded the Order of St. Vladimir .

Brodskyj died of diabetes in 1904 while on vacation in Basel, Switzerland. His body arrived in Kiev by train on September 24, 1904 and was received by thousands of people. The funeral service took place on the same day in the synagogue he had built. After a funeral procession from there to the Jewish part of the Lukjanivska cemetery , he was buried in a marble vault.