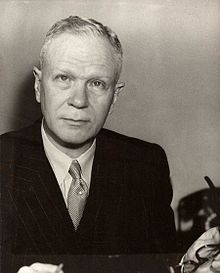 Lubbertus idols (* 10. October 1894 in Amsterdam ; † 13. July 1979 in The Hague ) was a Dutch non-party politicians , who later became the Anti-Revolutionary Party joined (ARP) and first several years Administrative Officer and most recently director of the tax authority of Dutch- India was.

Götzen, the son of a bank employee, attended the secondary school in Amsterdam and then completed vocational training in a fish canning factory in Ghent from 1912 to 1914 . During the First World War , he did his military service between 1914 and 1918 and also completed courses in accounting and statistics until 1918. On December 3, 1919, he became a reserve officer with the rank of lieutenant in the artillery and worked from 1919 to 1920 as a clerk at the tax audit office (charging accountants service) . During this time he completed his accountant diploma in 1920 from the NIVA (Nederlands Instituut van Accountants) accounting institute .

During the Second World War , after the occupation of Dutch India by the Imperial Japanese Army , Götzen was initially in a prison camp in Poerwokerto between 1941 and 1945 and finally in 1945 in the Bat-IV prison camp in Tjimahi . After the capitulation of Japan on September 2, 1945 and his related release from internment, he resumed his position as director of the tax authorities in Batavia, which he held until 1946.

After his return to the Netherlands idols in October was 1,946 head of Department II Finance in the Ministry of overseas parts of the empire, before Prime Minister Louis Beel in his first cabinet as a minister without portfolio on November 10, 1947 (zonder Minister portfolio) called and held this until March 15, 1951 also in the Drees / Van Schaik cabinet formed by Prime Minister Willem Drees. In particular, he was responsible for financial and economic affairs in the overseas parts of the empire and in this function was supposed to relieve the minister for overseas parts of the empire Jan Anne Jonkman . During a business trip from Jonkman to the Dutch East Indies between December 13, 1947 and January 1948, Götzen temporarily held the office of Minister for Overseas Parts of the Empire (Minister van Overzeese Gebiedsdelen ad interim) .

After leaving the government, he was appointed Commander of the Order of Orange-Nassau on September 26, 1952 .

President of the Court of Auditors

Götzen worked between January 1953 and April 1954 as a financial advisor to the Nederlandse Herstelbank in Washington, DC and then from April 1954 and June 1956 on behalf of the United Nations for the government of Bolivia .

On November 23, 1956, Götzen was appointed President of the Court of Auditors (Algemene Rekenkamer) by royal resolution (Koninklijk Besluit ) . He held this office as the successor to Derk Johan Gerritsen from November 27, 1956 to January 1, 1965. His successor was then Charles Jean Marie Hens . For his services as President of the Court of Auditors, he was finally appointed Grand Officer of the Order of Orange-Nassau on July 13, 1964 . He was also awarded the Officer's Cross of the House Order of Orange .

His marriage to Antonia Maria de Vriendt, which he entered into in Zeist on September 14, 1920 , remained childless.