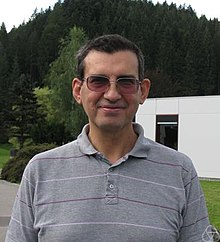 Luigi Ambrosio (born January 27, 1963 in Alba ) is an Italian mathematician who deals with analysis .

Ambrosio deals with the calculus of variations , geometric measurement theory and the theory of optimal transport with applications to partial differential equations .

In 1991 he received the Bartolozzi Prize of the Unione Matematica Italiana and in 1999 its Caccioppoli Prize . In 1996 he was a guest speaker at the 2nd European Congress of Mathematicians in Budapest , and in 2008 he gave a plenary lecture at the European Congress of Mathematicians in Amsterdam ( Optimal transportation and evolution problems in spaces of probability measures ). In 2002 he was a guest speaker at the ICM in Beijing ( Optimal transport maps in Monge-Kantorovich-Problem ). In 2005 he became a corresponding member of the Accademia dei Lincei and in 2006 of the Istituto Lombardo. In 2003 he received the Fermat Prize . In 2018 he was plenary speaker at the ICM in Rio (Calculus, heat flow and curvature-dimension bounds in metric measure spaces). In 2019 Ambrosio received the Blaise Pascal Medal and the Balzan Prize .

He was co-editor of the Archive for Rational Mechanics and Analysis , Calculus of Variations and Partial Differential Equations, and the Journal of the European Mathematical Society .