The title of this article is ambiguous. Further meanings are listed under Magirus (disambiguation) . 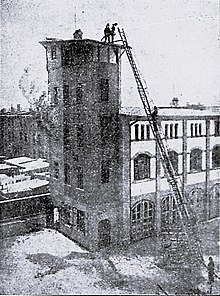 Exercise with the new Magirus ladder and smoke helmet on the riser tower of the St. Lorenz fire station in Lübeck (1902) 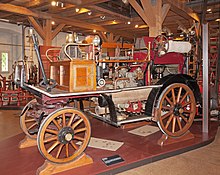 Magirus was a company from Ulm that manufactured equipment for fire brigades and commercial vehicles. The Magirus-Deutz brand and today's company Magirus GmbH emerged from it in the post-war period, which manufactures and sells vehicles and equipment for fire and disaster protection under the “Magirus” brand .

Conrad Dietrich Magirus was the founder and first in command of the Ulm Volunteer Fire Brigade and was involved in the construction of fire fighting equipment. He is considered the inventor of the mobile fire escape . In 1864 Magirus became a limited partner in the newly founded Gebr. Eberhardt, an open trading and limited partnership that manufactured and sold fire fighting equipment. After disagreements between Magirus and the Eberhardt brothers, Magirus then founded his own company in 1866, which he called the C. D. Magirus fire-brigade props factory . In the workshops on Ulm Promenade No. 17, he and his workforce made ladders and fire engines.

In 1873 Magirus developed the Ulmer Ladder , a 14 m high two-wheel extension ladder, which he presented at the World Exhibition in Vienna in 1873 and won a gold medal with it. In 1883 the eldest Magirus son Heinrich joined the company. Due to the high capacity utilization, the area on the promenade became too small, so that in 1885 a new factory was built on the Schillerstraße in the west of Ulm on the railway tracks, which was expanded over the next few years. In 1887 Magirus handed the company over to his sons Heinrich Magirus, Otto Magirus and Hermann Magirus .

From 1909 the company was called the fire equipment and vehicle factory CD Magirus ; on July 8, 1911, this was then converted into C. D. Magirus  AG . Early production milestones at Magirus were:

The vehicles manufactured by Magirus were initially pulled by horses, then powered by steam engines and later by gasoline engines. In 1914 the possibilities on the factory premises on Schillerstraße were exhausted, so that a second factory was built in Söflingen. During the First World War , Magirus began producing a 3-ton truck type in 1916 at the urging of the German Army Command . Heinrich Buschmann, who previously worked at Benz, also came to Magirus and set up a design department as a technical office for motor vehicles (TBK) and the production facilities for the production of trucks. Even then, the company was producing some of the chassis and engines for its vehicles itself. After the end of the war in 1918, the demand for trucks decreased, so that Magirus had to reduce its workforce of around 3,000 and for a time expanded production to include trailers and freight wagons .

From October 1919 to 1926, the vehicles were sold through the German Automobile Group (DAK), which was founded with the companies Dux , Presto and Vomag for sales purposes, so that customers could be offered a wider range of products. From 1919 Magirus also built omnibuses , initially with wooden superstructures on the truck chassis. In the 1920s, the range was expanded to include municipal vehicles and then more generally to trucks of various sizes. Motors from other manufacturers were also installed. In 1927 the plant again employed around two thousand people.

As a result of the global economic crisis and products that were not in line with the market, the company ran into difficulties in the early 1930s. Contrary to the increasing demand, Magirus vehicles were not equipped with diesel engines, but with gasoline engines . Diesel engines from Maybach and also from Continental were taken over from the USA . From 1929 C. D. Magirus AG manufactured its own diesel engines, with which all models of trucks and buses could be equipped from 1931. By granting more and more loans , banks took over the running of the company in 1932 and looked around for a suitable merger partner. You support the preliminary sale to Fritz Kiehn . He eventually sold Magirus to the Cologne-based Humboldt-Deutz engine factory after the entire Magirus supervisory board resigned in protest against the sale to Deutz. On March 5, 1936, Magirus was taken over by Humboldt-Deutz AG. This gave the engine manufacturer the opportunity to offer its diesel engines in its own commercial vehicles.

From 1940 the name Magirus was no longer used until the end of the war . From then on, the vehicles wore a circular logo with the word Klöckner-Deutz on the radiator grille instead of the Magirus logo introduced in 1932 - the stylized silhouette of the Ulm Minster as “M” for Magirus - and were sold under this name. In 1944, the engineers at Klöckner-Humboldt-Deutz (KHD) constructed diesel engines with air cooling ready for series production , which were installed in the company's own trucks, buses and fire engines from 1948 onwards. In 1949 the Magirus logo returned to the front of the vehicle and the brand name was from then on Magirus-Deutz .

In 1974 a cooperation with the truck division of Fiat was decided, which together with other truck manufacturers led to the establishment of the Iveco brand . Since Magirus-Deutz AG was now a subsidiary of Iveco as a result of the merger, it was renamed Iveco Magirus AG in 1983 .

Iveco Magirus , based in Ulm, initially produced and developed Iveco brand trucks and developed fire and disaster control technology until truck production was relocated to Madrid in 2012 after the euro crisis. After the end of truck production in Ulm, the local production of fire trucks was increased significantly. This concentration of production went hand in hand with the closure of several fire engine plants.

At that time, only the fire engines built by Iveco Magirus bore the Magirus logo.

In autumn 2013, the Iveco Magirus management announced that it would be selling the fire protection products again under the brand name "Magirus" and with a new logo. In the same breath, the company was renamed Magirus GmbH .

In 2014 the Austrian manufacturer changed its name from Iveco-Magirus-Lohr to Magirus-Lohr . The Austrian plant in Kainbach near Graz should be closed in 2012 and only remain as a service location. However, this decision was revised at the end of 2012. The plant in Graz has now been chosen to manufacture special vehicles within the group and to serve the Austrian market, while standard vehicles are to be manufactured in Ulm.