from Wikipedia, the free encyclopedia
This is the spotted version , flagged on July 10, 2019 . There are 15 pending changes that have yet to be viewed. 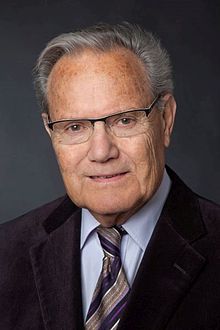 Manfred Weck (* 20th November 1937 in Solingen ) is a German engineer and emeritus professors . His main field of activity is the development of production systems, in particular machine tools, as well as their controls and automation.

After an apprenticeship as a toolmaker (1955-1958) and a skilled worker at the company Bremshey & Co. in Hilden (1958-1959) and after graduating from the commercial college in Solingen, Weck studied at the state engineering school for mechanical engineering in Iserlohn (1959-1961) and at the RWTH Aachen Mechanical Engineering , specializing in " Manufacturing Technology " (1963–1966) as a Dipl.-Ing. He was a scholarship holder of the “Prof. Dr. Koepchen Studienstiftung ”of the company RWE and the“ Studienstiftung des Deutschen Volkes ”. From 1962 to 1963 he worked as a designer and developer for production systems at his training company Bremshey & Co. and in his father's company, Gustav Weck, in Solingen, which manufactured surgical instruments.

After working as an assistant for three years at the WZL machine tool laboratory at RWTH Aachen University , Weck received his doctorate in 1969 with the then head of the laboratory, Professor Herwart Opitz , as a Dr.-Ing. with the dissertation: "Analysis of linear systems with the help of spectral density measurement and its application in dynamic machine tool investigations under working conditions". From 1969 to 1971 he was senior engineer at the same institute, responsible for the design, control technology and automation of machine tools. He also headed the transmission department at the WZL. In 1971 he completed his habilitation with the topic: "Dynamic behavior of cutting machine tools, influencing variables, assessment methods, measurement technology" and gave lectures on this subject as a private lecturer at the RWTH.

In 1971, Weck returned to industry at Wolf-Geräte in Betzdorf, where he was the managing director for the technology department, until he was appointed full professor at RWTH Aachen University in 1973 as one of Opitz's successors followed the chair for machine tools and was appointed co-managing director of the machine tool laboratory. His teaching and research areas were machine tools including their controls and automation. In 1980 he was offered a chair in “Machine Tools and Industrial Management” at the Technical University of Munich. However, he decided to stay in Aachen.

From 1980, Weck was also a member of the board of directors of the Fraunhofer Institute for Production Technology (IPT) in Aachen and was responsible for the areas of “ultra-precision machines” and “lightweight mechanical engineering with fiber-reinforced plastics”. From 1987 to 2000 he headed the DFG - Collaborative Research Center 332: “Production technology for components made from non-metallic fiber composite materials”. In 1988, Professor Weck founded the AIF member company at the IPT : “Forschungsgemeinschaft Ultrapräzisionstechnik e. V. ”, which he headed until his retirement.

He was active on the supervisory boards of the companies: Traub, Thyssen-Hüller-Hille, Demag, Dörries-Scharmann-Technologie, Otto-Junker-Stiftung, Mannesmann, Liebherr-Verzahntechnik as well as in the technical and scientific advisory boards of the companies: Maho, Wotan , Heyligenstaedt, Hegenscheidt, Schütte, Chiron, Mubea, Hydac and for many years on the board of the ThyssenKrupp-Rheinstahl-Foundation.

He was also a member of many associations and committees. I.a. In 1991 and 1992 he was dean of the Faculty of Mechanical Engineering at RWTH. From 1984–1989 he chaired the DFG expert group: “Design and Manufacturing Technology” and from 1990 to 1996 he was in charge of the AIF expert group GAG IV. From 1996 to 2000 he was Deputy Chairman of the Expert Committee of the DFG for Design and Production Technology. From 1999 to 2006 Weck headed the expert jury of the BMWi research program "INNONET". He is a member of the German Academy of Science and Engineering (acatech), a member of the European Society for Precision Engineering and Nanotechnology (euspen), of which he was President in 2000 and 2001 and which presented him with the 2003 Lifetime Achievement Award. Furthermore, he is a member of the North Rhine-Westphalian Academy of Sciences and Arts , as well as an honorary member of CIRP, the International Academy for Production Engineering and the Scientific Society for Production Engineering, WGP.

More than 200 of his research assistants or assistants at WZL and IPT completed their doctorates under his guidance and supervision.

In 2004 Weck retired after 31 years as a university lecturer. Three years after his retirement , the new WZL extension on the Seffent university campus was christened "Manfred-Weck-Haus" in memory of Weck.

In November 2015 Weck was appointed to the Hall of Fame for German Research .

On September 8, 2017, Weck was awarded the Aachen Engineering Prize for his life's work.

He is married and has two grown children. His hobbies are tennis, sailing, playing the piano, photography and hiking.